This team compiled of players not selected for their countries at this summer’s European Championships could realistically win the competition!

Below, we’ve picked our Ultimate XI of players who represent one of the 24 countries who’ve qualified for Euro 2016, and the reason they won’t be there. Two Liverpool players make the team for good measure!

Germany have the likes of Marc-Andre ter Stegen and Bernd Leno backing up Manuel Neuer, so it’s no surprise our summer signing hasn’t yet got the call-up. He was voted the second best keeper in the Bundesliga last season though, so if he starts life on Merseyside well, it hopefully won’t be long!

Real Madrid’s right-back picked up an injury in the Champions League Final, meaning Arsenal’s Hector Bellerin has been called up in his place.

Still probably the best fullback in the world, Lahm has retired from international duty but would walk into any side on the planet if availbale – at right or left back.

Poor Sakho was suspended without warrant by UEFA after a positive test for a substance that shouldn’t have been on the banned list. It cost him an appearance in the Europa League Final, and now selection for a tournament in his home country – when he would have otherwise been starting.

One of the best in the business when fit, fitness problems have cost Belgium’s captain his place at the tournament this summer.

Italy’s best player is missing the tournament injured, which is a shame for Antonio Conte’s side which lacks much of the class of yesteryear.

The superb midfielder is missing the tournament for Germany with an injury, but should be fit for a transfer to Manchester City before the end of the season. We hope he doesn’t adapt to Premier League football too quickly.

Such is France’s strength in depth, they’ve left wonderkid winger Dembele at home, despite his 12 Ligue 1 goals and five assists.

Missed the World Cup with injury, and is now missing the Euros as well, after Joachim Loew chose not to take a risk on his fitness.

Vincent Del Bosque doesn’t fancy Chelsea’s Brutish forward, who will have to watch his adopted country on television this term. Instead, he’s chosen 35-year-old Aritz Aduriz!

The best player not going to the Euros is Benzema, who has been banned from participation after allegedly blackmailing a team-mate over a sex-tape. Wow! 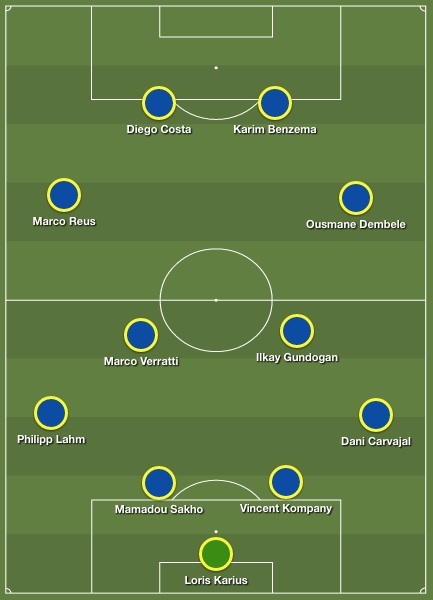 (Video) Champions League finalist has ‘accepted’ his Liverpool career is over