Fans of opposition sides often criticise Liverpool for only speaking about history, but if theirs was anywhere near as brilliant as ours, they’d probably do the same.

Sky Sports have undertaken a huge study of every domestic season played in the top flight over the past 50 seasons, including the campaign just gone. To qualify, clubs must have played at least 15 seasons of league football, and we came out on top – pipping Manchester United and Arsenal.

Amazingly, our average finish in this time is 3.46 – a jaw-dropping statistic – buoyed by our multiple title wins in the 1970s and 1980s. Sadly since the Premier League era began, the best we’ve finished is 2nd, but fell to a pretty miserable 8th last term – failing to make up for this with losses in two Cup Finals.

Spurs and Everton come ahead of moneybags Chelsea and Manchester City, while Leeds and Nottingham Forest are 12th and 13th respectively despite not playing top flight football for some time now.

Here’s the Top 20 sides in England, based on the past 50 seasons. Let’s hope we see ourselves at the top in a real table sooner or later! 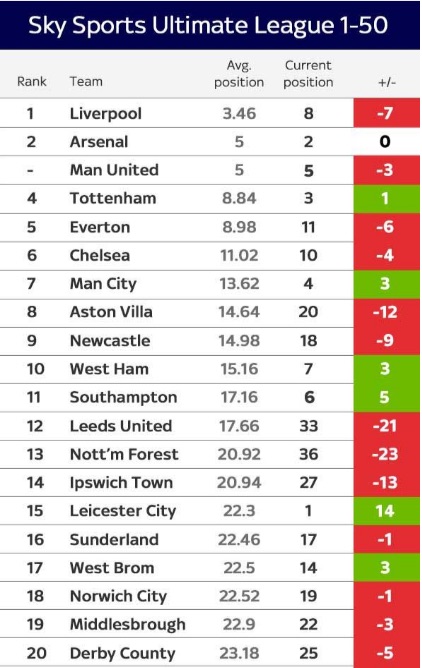