Raheem Sterling’s stock has fallen dramatically since we sold him to Manchester City for £49m.

And it’s just rock bottom, with an England fan setting up a Just Giving page to pay for the winger’s flight back from France to England…

Let’s face it we’re all sick of seeing this guy mince down the wing and fail to deliver a half decent ball into the box.

We’ll bring the lad home and then we can all stop cringing every time a gust of wind knocks him over.

Don’t worry about being generous, we’re of one mind. A penny each will cover it I imagine. 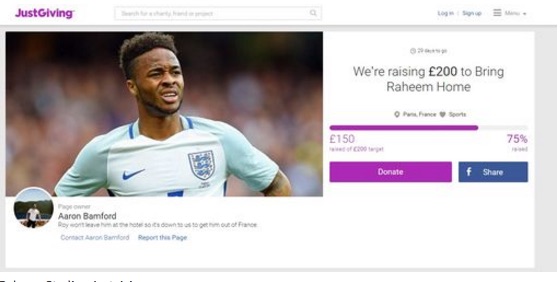 Sterling flopped against Russia and was woeful versus Wales yesterday, where he was quite rightly hooked at half-time for Daniel Sturridge.

His ex-team-mate scored the winner for England, and Sturridge is surely now a certainty to start ahead of Sterling against Slovakia.

Sterling was England’s best player at the World Cup two years ago, but now – when he should have developed and improved – the 21-year-old is bereft of confidence and looks a shadow of the player we had at Liverpool.

Bet he wishes he never left.

SEE MORE:
Milner does something he hates because it’s his mate Henderson’s birthday!