It looks like we’ll be able to keep hold of Coutinho this summer, thankfully.

James Pearce, arguably the most trusted reporter of Liverpool news, claimed on Twitter that he’d be ‘amazed’ if the Brazilian is sold during this window. 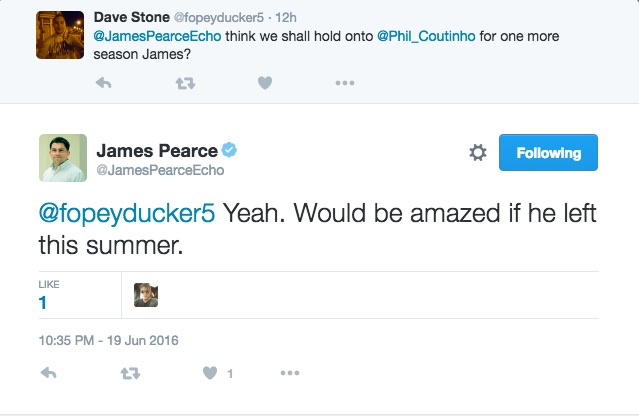 There’d been plenty of suggestions a few weeks back that our no.10 was a major target for PSG and Barcelona, especially after Coutinho’s wonderful Copa America hat-trick – but Pearce thinks we’ll hold onto him – for now at least.

Coutinho himself praised Jurgen Klopp recently, and we’d be devastated if we did lose perhaps our most talented player before the manager’s first full season in charge.

“I am grateful for everything Liverpool has done for me,” he told the Echo.

“Am I happy there working under Klopp? It’s clear, he’s great.”

Barca tried to steal Thiago last Friday, but he was having none of it