Earlier on Wednesday Martin Skrtel put himself in a little bit of hot water by essentially calling Jurgen Klopp a “d*ckhead” on Instagram. The Slovakian international has now apologised though, suggesting that it wasn’t him and a “close friend” of his had used his account (via the Echo).

As the report suggests, Skrtel’s Instagram account was involved with a back and forth with a friend of his, ending with Klopp being called a “d*ickhead”.

The player has now released a statement on his own Instagram account apologising for the incident, suggesting that the opinions expressed were not his own and his close friend was using his account. 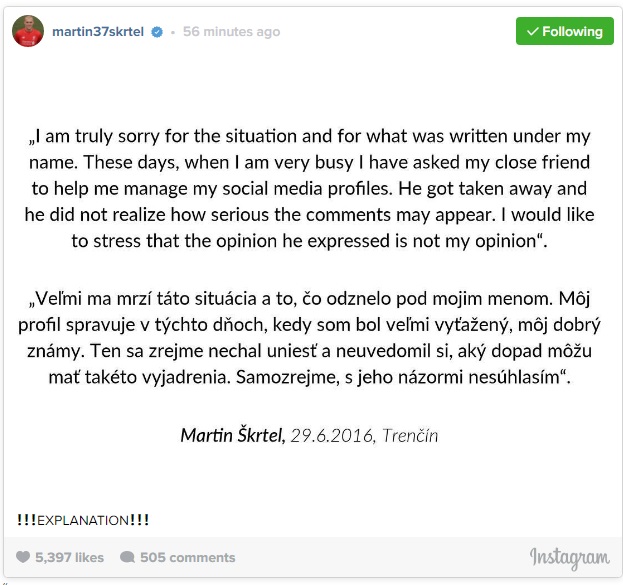 We obviously have no way of telling whether this is the truth or not, and if it is there’s no telling whether the majority of Liverpool fans will even believe him. It’s easy to say ‘it wasn’t me‘, but it’s not always believable.

After eight long-years at the club we at least owe him the benefit of the doubt though, so for the moment we’re willing to take him at his word. It would be a shame for him to leave the club under a cloud of controversy, and as the Echo’s report suggests, he does look likely to be on the move this summer.

It will be a shame to see him leave, but his performances recently haven’t been what they used to and he clearly isn’t in Klopp’s plans for the future.