Leicester City romped to the title after Spurs capitulated, while the mighty Reds could only muster a distant eighth. Chelsea were even worse, ending the campaign down in tenth.

Whatever your opinion, what last season proved is that in theory, anyone can win the league. If Leicester can, why can’t Hull? Or Burnley? Or Accrington Stanley?!

However, the magic of last season seems to have quickly faded.

Liverpool are up to fifth after our win over Leicester. We five behind leaders City, but only two points off second place (before Chelsea kick off against Swansea). But just look at the league’s top six sides after four games: 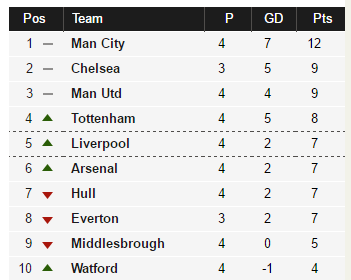 Where can the Reds finish this season? Can we make the top four? Even higher? Let us know in the comments.

Rent free! Liverpool have bought Jurgen Klopp’s house – and will let him live there for nothing