Adam Lallana ran his Christmas socks off over the festive period, covering more ground than any other Premier League player.

These stats were originally reported by Sky Sports.

Liverpool followed their 1-0 win over Manchester City with a frustrating 2-2 draw at Sunderland, but nobody could question the performance of Lallana.

As well as covering 13.22km, the 28-year-old had 106 touches of the ball on Monday – more than any other Liverpool or Sunderland player. He had two shots, made three key passes and won two free kicks at the Stadium of Light. 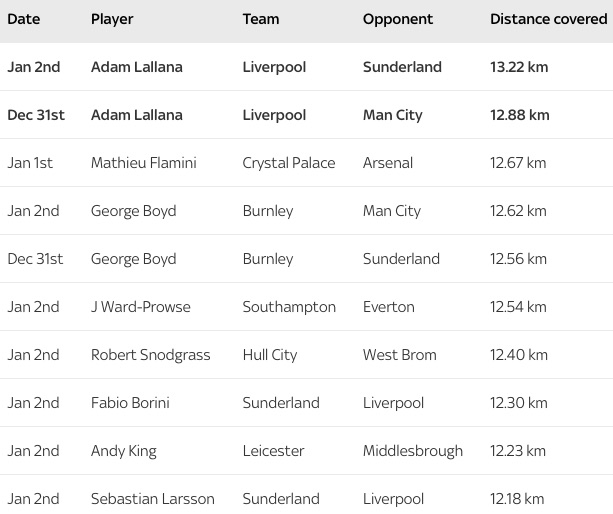 Liverpool’s game at Sunderland came less than 44 hours after the City match. Concerned about fatigue, Jurgen Klopp offered his players the chance to pullout of the first fixture of 2017, but all said no.

“I told the players if nobody wanted to play I would never speak about it and not tell anyone, but nobody came. That was a good thing,” Klopp told BBC Sport.

Liverpool’s next Premier League game is not for another 13 days when they visit Manchester United.

However, the Reds have two cup ties to navigate first – against Plymouth Argyle and Southampton.

(Video) Lallana explains moment Klopp told him he had to leave Liverpool: ‘He was very honest…’