Roberto Firmino has endured a couple of quiet weeks in a Liverpool shirt as far as his creativity and goal scoring threat is concerned yet he has by no means moved away from the work rate that has seen him cement a place in the starting eleven.

The Brazilian has locked down his position as one of his team’s three forwards having become a key implementer of the ever familiar high press and energy that Jurgen Klopp demands.

His defensive work at the top of the pitch has been well evidenced by a recent statistic courtesy of Squawka. 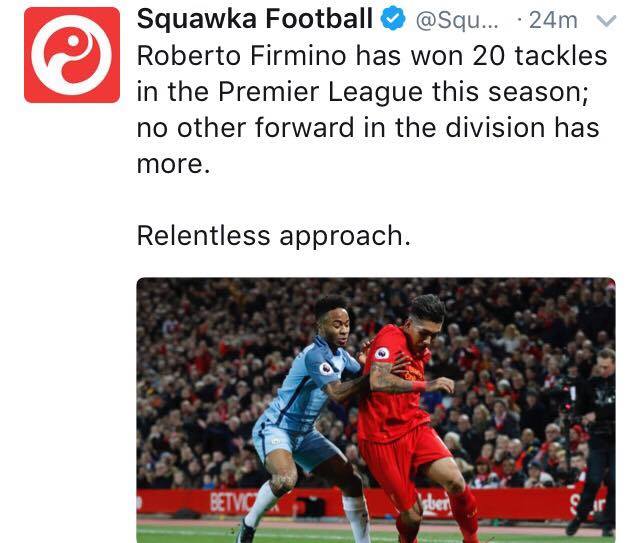 His tackling figures reinforce how good a fit he is to Klopp’s system and how important he has been in leading this side’s defensive work from the front.

Though he has been far from his usual self in recent games, he is sure to benefit from the return of Philippe Coutinho. The pair had been outstanding together prior to the little magician’s injury and will need to rekindle that on-field understanding during a testing period for Liverpool.

Sunday’s game against Manchester United could be what Firmino needs to re-trigger his quality and his influence on the pitch. It comes as the kind of hard fought, feisty and telling contest that needs the best from every player involved.