It has been confirmed which teams could pose as a threat to the excitement surrounding Liverpool once again being involved in the Champions League.

The Reds’ fourth placed finish in the Premier League means they face a play-off round scheduled for August, which they will enter as one of the seeded teams alongside Napoli and Sevilla.

AEK Athens’ 2-1 win over Panionios on Wednesday night ensured they topped the Greek Super League play-off and meant they are the 10th team confirmed for the fourth qualifying round.

Jurgen Klopp’s men will face one of the five unseeded sides that progress through the fourth qualifying round or one of the two unseeded teams already set to feature in the play-off round, as highlighted in the right-hand column in the graphic below. 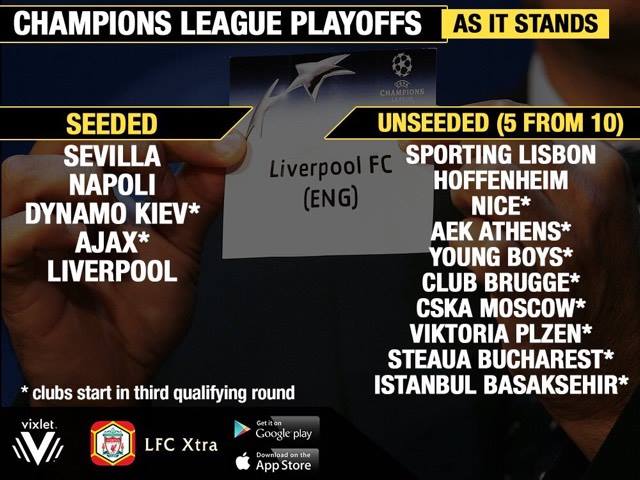 Standout potential opponents include Mario Balotelli’s Nice side that finished third in Ligue 1 and Roberto Firmino’s former emplyers Hoffenheim, who finished fourth in the Bundesliga and only two points behind Borussia Dortmund. Sporting Lisbon could also be a tricky obstacle to overcome having finished third in the Primeira Liga behind Porto and champions Benfica.

The draw will be made on August 4 with a view for the games to take place on either August 16 or August 17 and the return legs a week later. The reasoning behind Jurgen Klopp’s desire to get transfer business done relatively quickly becomes fairly self-explanatory when considering how quickly the games promise to come about.