Liverpool’s opening day of pre-season training saw Dominic Solanke snapped alongside his new teammates for the first time since his move from Chelsea.

The striker is expected to be officially announced as a Red on Wednesday, weeks after having initially agreed his summer move to Anfield.

Solanke’s presence meant an initial 22-player cohort returning to training rose to 23, with a number of familiar first team stars having been granted a longer break after being on international duty following the end of last season.

Though this was the case for some, it certainly hasn’t been for Solanke, who joined up with his team on the very first day despite playing a prominent role in England’s recent U20 World Cup win, in which the 19-year-old was named the tournament’s best player. 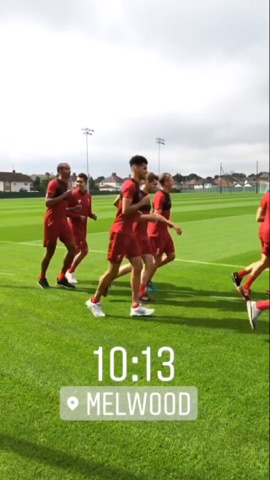 Putting in the groundwork. ?

Aside from Solanke, a mix of senior players, returning loanees and youth stars made up the group of players that turned out as the club’s summer preparations got underway.

Jordan Henderson returned to action having missed the end of last season with injury while Roberto Firmino also arrived back at Melwood after getting married in Brazil last month.

Mamadou Sakho, Lazar Markovic and Alberto Moreno also reported for training despite all three looking set to leave the club ahead of the new Premier League campaign.