Gini Wijnaldum has spoken out about Liverpool’s inability to finish teams off when dominating matches.

The 1-1 draw against his former club Newcastle United on Sunday means we’ve won just once in six games in all competitions – all of which bar the Manchester City game we’ve easily been the better team in.

SEE MORE:
LFC are a much better team when we have less possession..

Against the Toon, Burnley and Spartak Moscow especially, we had all the ball and countless opportunities to put the opponents to bed, but we couldn’t do it – partly because of bad luck and partly because of shoddy finishing.

“We didn’t score the chances we had and that makes it frustrating, because I think we deserved to win,” Wijnaldum told Liverpoolfc.com.

“We gave two chances away – one was the goal and the other was in the second half from a set-piece. We had clear chances, good opportunities to score a goal but unfortunately we didn’t take them.

“We are unlucky at this moment. But if we score the chances we have, those things (the Newcastle equaliser) can happen and at the end nobody will speak about it again.

“Now, because we didn’t score the chances we had and we conceded one where we were not concentrated enough, everyone will talk about the goal they scored.

“It’s difficult to say [why]. People don’t miss on purpose – everyone is trying to score a goal.

“But we are not lucky now with the finishing. First of all, it’s good that you create that many chances but we have to make another step to score them.”

The international break is annoying as we now have two weeks to think about the failure at St. James’ Park…

But on the other hand, it could be just what we need – some time away for management and players to reflect on what’s happened and how to combat it.

Wijnaldum is right that luck has simply not been on our side. On multiple occasions we’ve been denied penalties in our poor run, which was set off by the Sadio Mane red-card at the Etihad.

Wijnaldum is waiting for a new contract offer from Liverpool – report 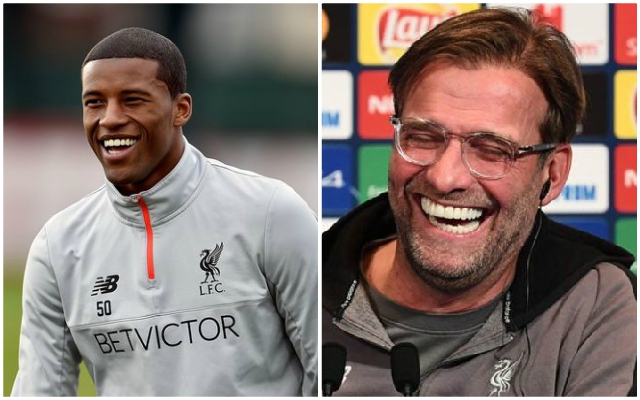