Real Madrid have closed the door on a summer exit for Marco Asensio following reported interest from Liverpool in the Spanish starlet.

It was recently claimed the Reds had tabled a mammoth £159million bid for the 22-year-old amid suggestions of an uncertain future at the Bernabeu.

The departure of manager Zinedine Zidane had placed doubts over Asensio’s place in the plans of successor Julen Lopetegui.

Nevertheless, it has since been made clear that club president Florentino Pérez has no intention of letting the attacking midfielder leave.

In fact, Spanish outlet Mundo Deportivo say Real Madrid have rejected Liverpool’s £159million offer and that Asensio himself is keen to stay put. 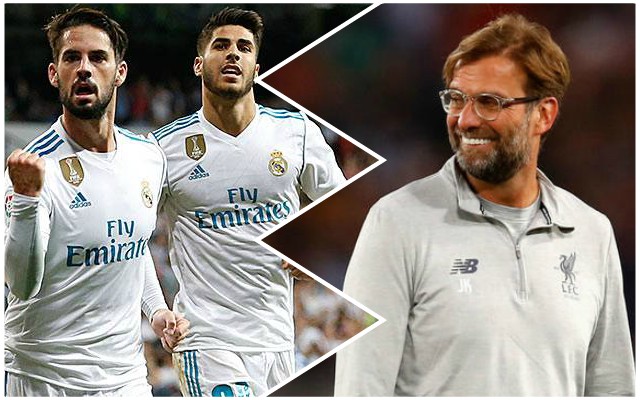 Rumours continue to suggest that Real could cash in on Asensio as a means of raising funds for Paris Saint-Germain’s Neymar.

With Gareth Bale’s future still to be decided, however, it seems increasingly unlikely Real will allow one of their prized assets to leave.

Asensio recently spoke in response to the Liverpool links, merely stating that his club future would only be spoken about after the World Cup is over.

The search for another playmaker looks set to ramble on following the collapse of a deal for Lyon’s Nabil Fekir after concerns over his medical.

Whilst it seems difficult to comprehend Jurgen Klopp making such a substantial offer, a glimmer of truth does stem from the German’s alleged interest in the player last summer.