Liverpool’s Virgil van Dijk is the fourth best centre-back and fifth best defender in the world – at least, going by PES 2019 ratings.

See below for an image posted by Pro Evo’s official Twitter page, with Van Dijk getting an 87, putting him behind only Marcelo, Gerard Pique, Mats Hummels and Sergio Ramos.

That’s obviously pretty decent from big Virgil, who’s having another superb season at Liverpool after his January move from Southampton. 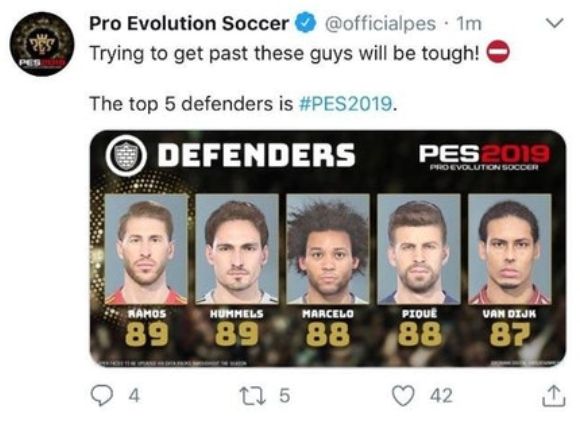 Adding leadership and calm to a back four that lacked both for some time, the Dutchman looks, alongside Alisson, like making us into a real force by giving our attack a solid foundation to rely upon.

Anyway, we’d argue he’s quite possibly better than both Pique (past his best) and Ramos (overrated because of his goals) at present, but never mind.

It will be interesting to see more ratings leaks like this from Pro Evo and FIFA in the coming weeks as our players are sure to all get a bit of a boost after last season’s Champions League final run.