Antoine Griezmann has been a Bobby Firmino fanboy for years!

The Frenchman once claimed on Twitter that our Brazilian is a TOP player, and has shared numerous social media posts that big up Liverpool’s no.9.

And today, he’s shared an Instagram post thanking our forward for sending him a Brazil strip with R.Firmino – 20 on it! 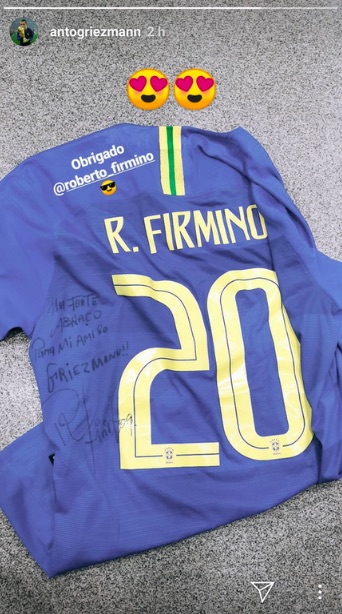 Sadly, we’re not sure Griezmann is on the market, as he’d be a rather tidy addition to Liverpool’s offensive options!

SEE MORE:
Tite: I’m using Klopp’s tactics to get best out of Firmino

Still, we’ll enjoy him for afar, as he clearly does regarding Jurgen Klopp’s Reds.

Griezmann won the World Cup with France this summer and decided to stay at Atletico Madrid, turning down the attention of Barcelona in the process.

It’ll be some time until Liverpool break the bank on an top level attacker though, because we already have fantastic options at the club.

Along with Firmino, we have Mo Salah and Sadio Mane – with Daniel Sturridge, Xherdan Shaqiri and Divock Origi as backup options.