Virgil van Dijk was recently voted the Professional Football Association’s Players’ Player of the Year, but it’s not just the Premier League in which he dominates.

Ahead of Liverpool’s all-star Champions League clash with Barcelona on Wednesday night, the people behind Driblab have compared our number four with Gerard Pique and Clement Lenglet. 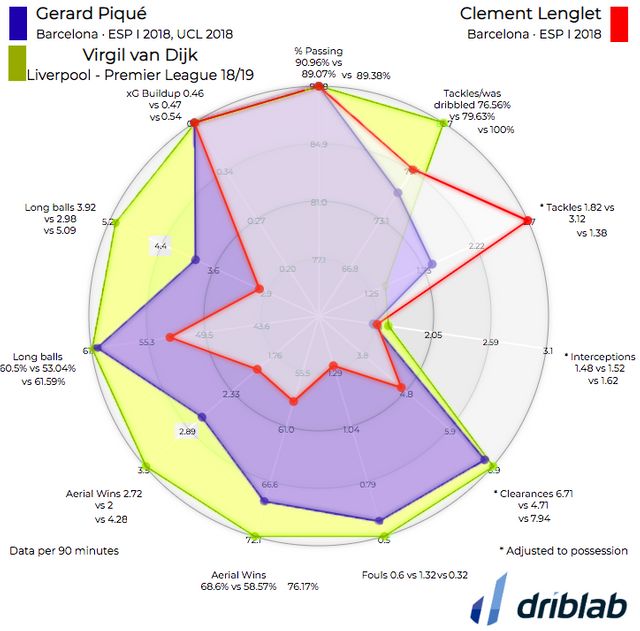 It’s a bit like a train crash – you don’t want to look directly at it! Virgil quite literally dominates them both in every aspect.

The first thing you’ll notice is that Lenglet averages more tackles than both Pique and van Dijk per 90 minutes, but that’s a little misleading as it isn’t exactly a positive thing.

Paolo Maldini: "If I have to make a tackle then I have already made a mistake."#WednesdayWisdom #UCL pic.twitter.com/ztXs6CxFlf

It’s not a shock to see the Dutchman’s superior passing stats in this graph – several times this season we’ve seen him pump a searching ball up the field only for it to land on the feet of a Reds player.

Standing at 6’4″ and seemingly being able to out-jump some NBA players, it’s not a surprise that Virgil dominates on the aerial duels as well.

Lionel Messi and Luis Suarez are now in van Dijk’s headlights. Only time will tell if we’ll come out on top in that battle, but the statistics show we’ve probably got a better chance than most.

One thing is for certain – we’ll have the best centre-back on the field.

I’m looking forward to Bobby Firmino taking on Lenglet – I’m not sure the Frenchman will be able to deal with him. Taking a look at his fouls per 90 is interesting – I can already picture Mo Salah dancing into the box to get clattered.