In his match preview column for The Times, Northern Football Correspondent Paul Joyce has given his pre-match thoughts on the first leg semi-final, including the predicted line-ups for both sides.

In Joyce’s reliable opinion, Joe Gomez could return to our back-line but in a right-back position next to Joël Matip. It’s a big call, but the Times journalist is an authoritative source and we respect his ideas.

Joyce also sees a return to the starting XI for Roberto Firmino after the Brazilian seems to have recovered from a muscle tear in his groin. 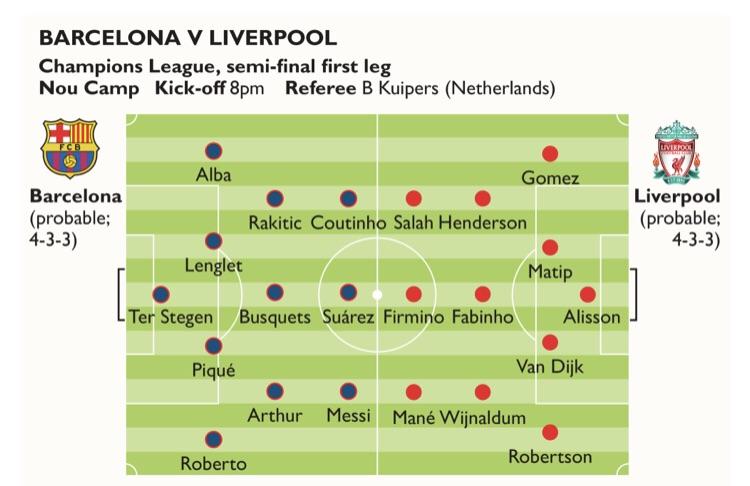 We don’t feel comfortable about leaving out Trent Alexander-Arnold, but perhaps Joyce feels that having a more defensive option in Joe Gomez will allow us to deal with one-on-ones on our right.

Trent is an exceptional young talent, but so is Gomez and it seems the opinion from The Times is that he would better suit a game where we’ll be doing plenty of defending away at Camp Nou.

Either way, with Virgil van Dijk at the heart of defence, whoever plays at right-back will be in very solid company as Leo Messi & Co. try and get past us.

0 – No opposition player has completed a dribble past Virgil van Dijk in any of his 36 PL apps this season. In fact, this run stretches back to last March, meaning he hasn’t been dribbled past by an opponent in any of his last 45 PL apps. Immovable. #PFAAwards #POTY pic.twitter.com/Y8BIsle0vq

While we would love to see Bobby starting down the middle it’s not a certainty that he will be ready for it. That said, we agree with Joyce’s balanced midfield selection despite Naby Keïta’s good showing against Huddersfield.

Making the obvious allusions, Joyce stated the “reacquaintance with former Liverpool players Luis Suárez and Philippe Coutinho are subplots in this mouthwatering occasion, the former with rather less to prove than the latter, whose decision to leave last January has served Liverpool rather better than himself.

He continued by saying the “proceeds of his £142 million move were reinvested astutely to effectively offset the arrivals of Virgil van Dijk and Alisson and have allowed the club to go from strength to strength.

“Liverpool must prove it on this stage and seize their opportunity to ensure no favours are required.”

As befits a journalist of his calibre, Paul Joyce has posed all the right questions – now it’s up to us to answer them on the pitch tonight!