A trio of Reds – Trent Alexander-Arnold, Alex Oxlade-Chamberlain, and Ben Woodburn – have been out in Los Angeles this week training with football fitness coach Nicky Holender.

Posing for a photo with Jürgen Klopp’s British contingent, Holender published a post on Instagram with a caption thanking the Reds for the session, which included a quick five-a-side game afterwards. 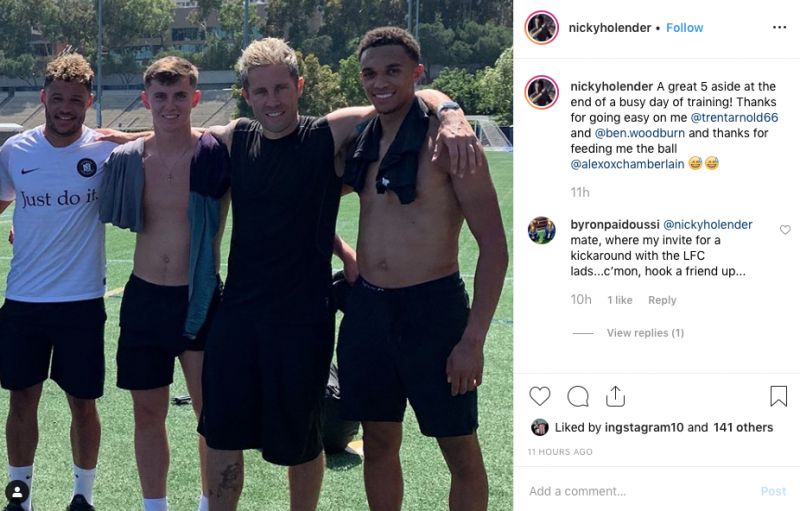 Klopp will likely be heartened to see his boys working hard to keep fit despite being granted leave before pre-season starts in July.

A glance at the coach’s Instagram shows that he is a massive Tottenham Hotspur fan – pictured alongside Spurs players, he even has a tattoo of White Hart Lane emblazoned on his chest.

Despite suffering defeat in Madrid at the hands of Origi, Holender honourably took to Instagram to congratulate his client: “More than anything I’m extremely proud of how hard this guy has worked the past year!

“This is no overnight success, this has been a hard fought battle which has been won through blood, sweat and tears! Well done @divockorigi.”

Origi, Trent, Ox, and Woodburn, will all be ready to get started with pre-season once the Tranmere Rovers friendly rolls round on 11th July.

After that, the Reds will begin the 2019/20 season with the Community Shield clash against Manchester City on the 4th August.

A Friday night kick-off against Norwich on the 9th August gets our Premier League campaign underway at Anfield, while Spurs will play us for the first time since Madrid on the 26th October.