Liverpool legend Jamie Carragher has shared a photo of himself to his Instagram profile, but there’s one big difference – he’s got no hair!

Carra posted the image to his story, and it shows him with a goatee and a shiny dome in support of the manger who guided him and the rest of the Reds’ squad to Champions League glory in 2005.

It’s unclear if his new look is legitimate or a decent Photoshop job, but it’d be typical of the former centre-back to have some fun on social media. 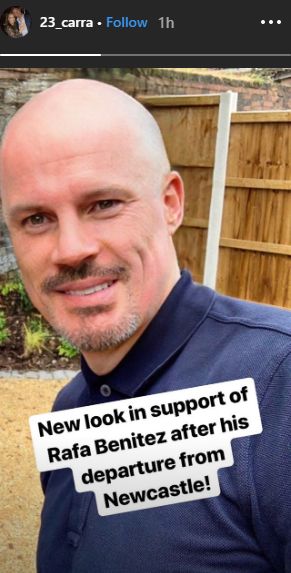 Newcastle United confirmed earlier this week that Rafa will leave the club when his contract expires on the 30th June.

There has been continued speculation about his future prior to the club announcing his departure, with Benitez receiving a £12m-a-year offer, as per the BBC, to take over as manager at Chinese Super League club Dalian Yifang.

The Magpies put Rafa at the helm after Steve McClaren was only able to guide the historic club to teetering on the Premier League’s relegation zone with ten games remaining of the 2015/16 season.

The Spaniard could not prevent the club from being relegated, but they won the Championship title the following season to ensure an immediate return.

Newcastle have since secured back-to-back seasons of mid-table finishes.

Liverpool’s NFT drop: Why it was a disaster