The Premier League’s youngest-ever player, Harvey Elliott, has finally been annouced as a Red.

Arriving at Anfield with a wealth of promise, the 16-year-old will be donning the No. 67 shirt at Liverpool.

The former Fulham youngester is set to join up with Jürgen Klopp’s squad for the Napoli friendly at Murrayfield before journeying with the Reds to the Evian training camp.

Despite wearing No. 67, it was in the 88th minute that Elliott broke the record for the Premier League’s youngest-ever debut after coming off the bench against Wolvehampton Wanderers back in May, aged just 16 and 30 days. 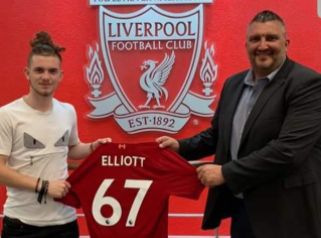