Virgil van Dijk is lauded for his composure, his aerial ability, his leadership qualities and his superb long passing – but if that wasn’t enough – he also happens to be one of the fastest players in Europe!

Yesterday, UEFA released a list of the fastest sprints recorded in last season’s Champions League – and the Dutchman came out on top ahead of Manchester City duo Leroy Sane and Kyle Walker. 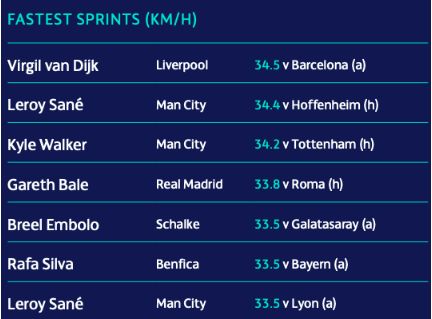 In fairness, we’d suggest Sane has faster acceleration than our brilliant Dutchman – but obviously their top speeds are comparable!

Van Dijk was exquisitely good against Burnley last time out, winning nearly every header against Ashley Barnes and Chris Wood – which is no easy feat.

The world’s best defender recently won UEFA’s Player of the Year award, which makes him the favourite for the Ballon d’Or.

All of this will pale in comparison of course if we manage to win the Premier League this season.