Virgil van Dijk lost out to Lionel Messi in the FIFA Best Awards on Monday evening, with the Argentine scooping the gong despite missing out on the Champions League with Barcelona.

But the Dutchman still released a message of congratulations for the winners on the night, thanking Liverpool for helping him reach the podium in the first place.

You can read it, below: 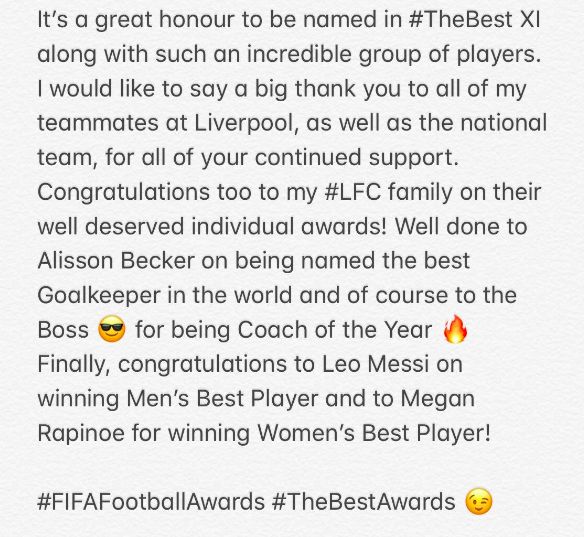 We’re not especially angry about Messi winning, as we’re pretty sure van Dijk will still take home the Ballon d’Or!

Losing to Messi is no shame – he did score 51 goals in 50 games last season and is probably the greatest footballer to ever grace the field.

And anyway, the fact Marcelo and Sergio Ramos made the FIFPro XI proves the awards are simply a popularity contest and not fairly judged.

Both the Real Madrid players were dire last season for an underachieving side, with the former not even in the Brazil squad anymore.