Leicester City star James Maddison has joked with Liverpool captain Jordan Henderson on social media, after the controversial penalty decision at Anfield over the weekend.

The Reds were awarded a spot kick after Sadio Mane was fouled in the area – the Senegalese star went down a little theatrically, but contact was clearly made, and some rival fans have given us stick.

James Milner – Mr Reliable – stepped up and burried the penalty into the net which secured Liverpool’s continued 100% record in the Premier League.

The Foxes payed well, and at times it looked as if they may have been the team that would snatch the three points, but the Reds got it over the line.

Now on international duty with England, Maddison has joked with Hendo and Ben Chilwell that it as “never a pen”. To be honest, it’s good that the players can joke about stuff like this – I’m not sure it’d be so much fun in the Three Lions’ camp if they fell out. 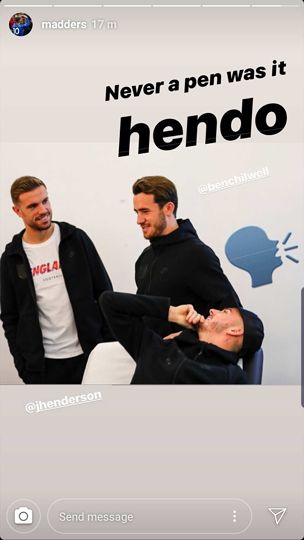 The penalty decision probably wasn’t the most talked about moment of the game though as Hamza Choudhury put a strong challenge in on Mo Salah, and the Egyptian now appears to have been injured by it.

Luckily, the Liverpool star has seemingly escaped a serious lay-off.