Roberto Firmino laughed off Roy Keane’s fairly archaic criticism of he and Manchester United’s Brazilians at the weekend.

The former United captain was raging that the likes of Fred and Andreas Pereira were seen hugging Bobby and Alisson before the crunch game at Old Trafford on Sunday afternoon.

Below, you can see Keane’s original shots and our no.9’s cool response: 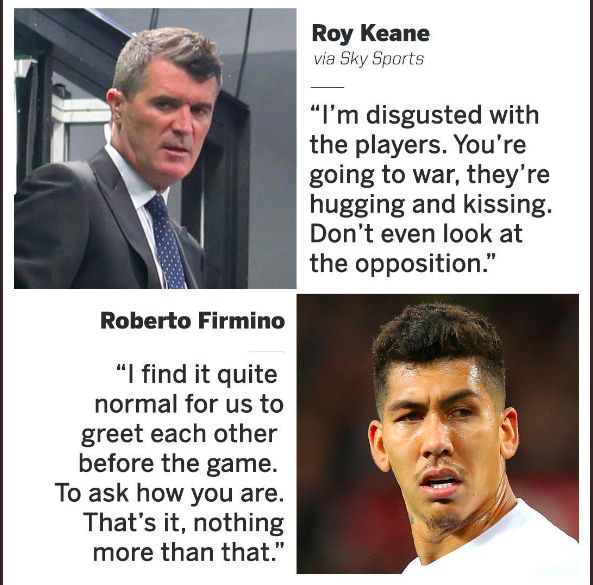 Perhaps it’s a big deal for a former Premier League hard-man, such as Keane – and we won’t lie – it always looks a bit weird to us as well – but different cultures have different practises.

And whenever Firmino or any other Liverpool player, in fact, has been friendly in the tunnel before the game – it has had zero correlation with a poor performance.

Bobby started the season in jaw-dropping form, but has had two quiet outings v Leicester and then Manchester United.

When he ticks, Mo Salah and Sadio Mane are maximised – and we’d love to see him at his brilliant best tonight in the Champions League, but especially v Spurs on Sunday.

Roberto Firmino’s best days ‘well and truly behind him’ and he needs replacing this summer, says Athletic