The Scouser was miles ahead of the young Italians, none of which will make it as professional footballers at the highest level from what we saw.

One moment trended on social media though after Jones scored a penalty, as he was filmed telling team-mate Harvey Elliott to ‘Shut ya mouth, or the next one, I’ll take it as well!’.

Jones posted this message on Instagram after the game, showing his love for his ‘lil bradda’ Elliott – and thanking him for an assist. 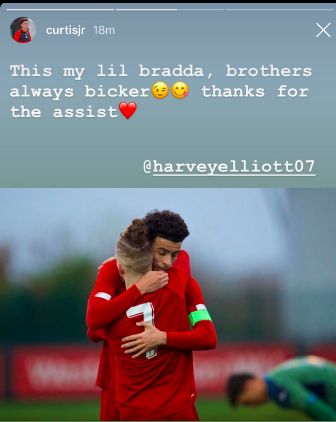 We just love how feisty Jones is, in all honesty.

When you’re devouring a team that badly and you’re still this pumped, you’re a winner!

Jones and Elliott will likely both feature in the EFL Cup Quarterfinal with Aston Villa in a few weeks’ time – as the rest of the first-team will be in Qatar trying to win the Club World Cup.

You can watch the moment in the video below, courtesy of BT Sport:

😂| Jones telling Elliott who is boss! ‘Harvey, shut your mouth or the next pen I’ll take aswell!’ pic.twitter.com/DxGH3FIe8l