There’s an interesting report in Football Critic today that uses Opta data to show that Roberto Firmino has the biggest gap between league goals and xG (expected league goals) in Europe.

EXPECTED GOALS (xG) assesses the quality of a shot based on several variables such as assist type, shot angle and distance from goal, whether it was a headed shot and whether it was defined as a big chance. From there that shot is assigned an xG score and the cumulative total of these scores provides a team’s xG for a match.

The Brazilian has bagged eight domestically, but his xG is 15.5 – meaning he should have scored around 15 or 16 – based on the quality of his chances.

The model isn’t perfect, of course, but it does suggest Bobby has missed some gilt-edged opportunities – something which is undeniable.

Of course, having a higher xG and less goals is not a problem. It suggests the player is getting in the right positions and eventually that goals will come. Having a lower xG but plenty of goals shows a player is on a hot streak of finishing that will not last (no player outperforms for their xG season on season).

Bobby offers Jurgen Klopp’s Reds so much more than just goals, of course – and the fact we’re 25 points clear at the top of the Premier League table proves that. The sensational no.9 is the hardest working attacker in Europe and the creativity he provides us in and around the box, as well as his selflessness, maximises the potential of Mo Salah and Sadio Mane – both of whom perform much worse without him.

Still, when Firmino finds his finishing boots, we’re going to be looking at even more extraordinary player. Remember, in 2017/18 he notched 27 goals in total.

Check out the table below: 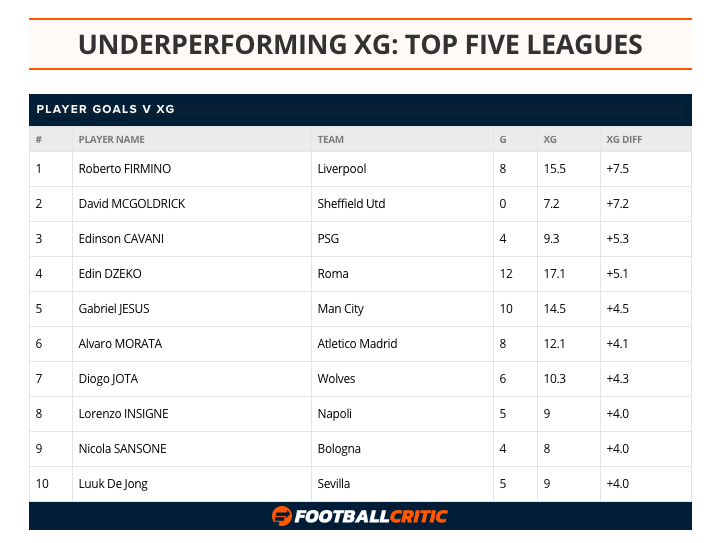 Right now, football is suspended and we’re having to endure a difficult wait for its return. If you want to entertain yourself in the meantime, check out Jazzy Spins Online Casino, considering there’s no games to bet on!

Officially, the Premier League is only suspended until April 30, but we highly doubt it’ll reconvene at the beginning of May – meaning our wait for no.19 will go on…

There is surely no chance the powers that be will void a season with only nine games left, however, so providing we’re patient – we should still be celebrating this summer.

Roberto Firmino’s best days ‘well and truly behind him’ and he needs replacing this summer, says Athletic