Mo Salah and Dejan Lovren are best friends – so this shouldn’t be taken as anything other than a friendly p*ss take!

Today, the Croatian defender uploaded a video of his winner v Borussia Dortmund, which was four years ago today. (Where does the time go?!)

Lovren stated that it was ‘one of his favourite moments,’ before Salah replied ‘You mean the only good moment?’

The defender shot back that ‘I am still waiting for your big moment,’ which in fairness, doesn’t hold up to scrutiny considering the endless number of big goals the Egyptian has scored!

Lovren is likely to leave at the end of this season following six years at Anfield. The centre-back has fallen down the pecking order behind Virgil van Dijk, Joe Gomez and Joel Matip – and as he’s now in his 30s – it’s probably time he finds first-team football again.

We hope that Salah is still just as happy on Merseyside without him – their bromance is very wholesome! 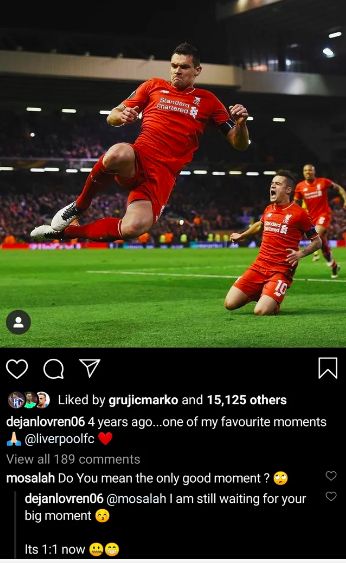