After Liverpool won the Champions League title in 2005, Reebok manufactured a special red and gold shirt bearing five stars above our crest.

This kit was used in the Intercontinental Cup (now known as the FIFA Club World Cup), so it’s a somewhat special shirt that didn’t get a lot of circulation.

We didn’t get any special treatment from New Balance when we won the Champions League last year, so we didn’t get a shirt with six stars on it, but a digital artist has created one.

The graphic below states it was created by @turbinal_designs, but their accounts are no longer active on either Twitter or Instagram. 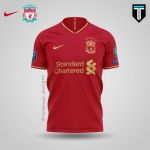