Former England international Alvin Martin believes that Liverpool and the rest of the Premier League clubs will find it extremely difficult to get to grips with playing behind closed doors.

The top flight is set to resume the 2019/20 season during June, but supporters across the country have been barred from attending any of the matches.

With the Reds needing just a couple of victories to claim their first top flight title in 30 years, their fans had been hoping to be able to roar the team across the line.

While upcoming fixtures against Everton (A) and Crystal Palace (H) present Jurgen Klopp’s team with a golden opportunity to get the job done, Martin says things may not be that straightforward.

“To go from playing in a full stadium to playing behind closed doors is eerie,” he said. “The atmosphere that you’re reliant on isn’t there and you can’t feed off the energy of the crowd.”

Liverpool fans are widely regarded as the team’s 12th man, meaning that playing fixtures in an empty stadium will be a surreal experience for the players. 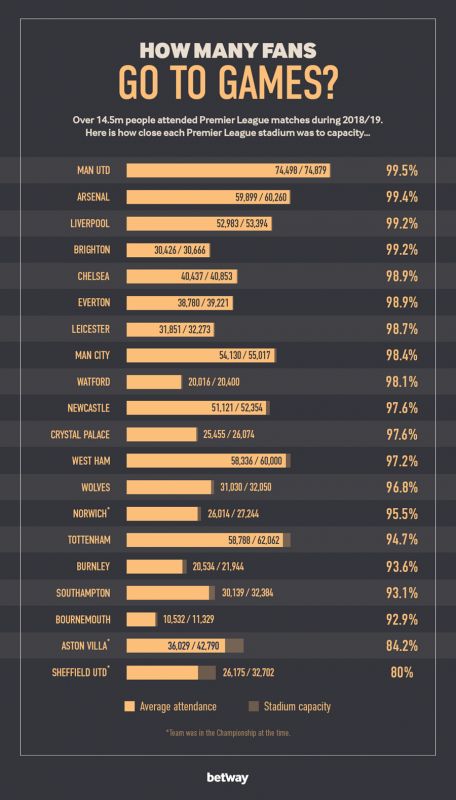 According to research conducted by Betway Online, the club’s 52,983 average attendance last season was the sixth highest in the top flight.

With a capacity of 53,394, it meant that Anfield was 99.2 percent full during the 2018/19 campaign, marginally behind Manchester United and Arsenal.

Martin, who spent his childhood years supporting Liverpool, believes that supporters play an important role in the performance of their team.

“Those big atmospheres help give you an extra five or 10 percent that you can’t replicate in training,” he added.

“They make you nervous, which I think is a very healthy thing for a sports person. When you’re nervous, that’s when you perform your best.

“If you go in for a tackle and there’s a crowd roaring for you and willing you to win it, I think inevitably it puts a little bit more onto you.

“Similarly, when the crowd produce that enormous roar when a goal goes in, it gives you a lift.”

As highlighted by initial results the Bundesliga since its resumption, Martin may well have a point regarding the influence that fans can have on results.

Of the 46 matches to take place in the German flight over the past few weeks just 10 have been won by the home team (21.7%).

That is significantly lower than the 43.3% of games that were won by the home side before the shutdown in March – a decrease that is sure to set nerves jangling around Liverpool.

Mo Salah ‘on the shortlist of Tuchel and Chelsea’, says Christian Falk