The 2,000 fans returning to Anfield for Liverpool’s impending clash with Wolves were greeted with a powerful anti-racism message, which was projected on the stadium front.

It provided an important reminder of the continuing struggle many players face in the game, encouraging supporters to band together in the fight against racism. 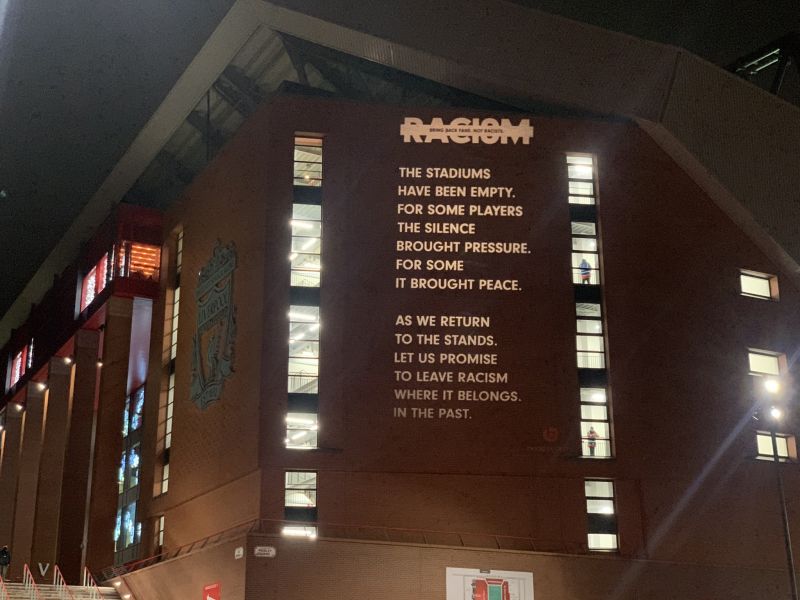 The club’s message is particularly relevant, after a section of Millwall fans were heard booing players who took the knee, during the side’s meeting with Derby yesterday.

We at the EOTK speak for everyone when we say that such behaviour is unacceptable, and we’re fully behind Liverpool’s efforts to eradicate racism from the sport, and beyond.

Though it goes without saying, it remains fundamentally important that football clubs – especially those with the kind of global following that the Reds inspire – continue to publicly oppose racial injustice, wherever it arises.

It may seem an increasingly impossible task, particularly given the global state of affairs, however, we must have hope of a fairer world.

With that in mind, let’s kick off the fixture with a show of support, not just for our lads, but for those who have ever felt isolated on the pitch.

Let’s remind everyone that we have the greatest fans in the world.