Liverpool have been found to be worst-affected by VAR across the Premier League, according to a report by ESPN.

The analysis of VAR’s decision-making this term found that Jurgen Klopp’s men were on the receiving end of eight calls that went against them – the most of any of the league’s sides.

VAR’s propensity for undermining Liverpool, seemingly at every available opportunity, will hardly come as a surprise to most fans.

However, when looking at the litany of decisions that went against us, it’s rather remarkable how the Reds have gone into Christmas as the league leaders.

It’s rather telling of the group assembled by Klopp that, despite the host of injuries suffered – including to Virgil van Dijk, Thiago Alcantara and Diogo Jota – and the calls that have gone against us, we’ve not accepted the fate our circumstances are determined to hand us.

We may be due for some more VAR-related controversy in future, but if Liverpool continue to perform as they have, even the technology won’t be able to stand in the way of our efforts to retain the Premier League trophy.

Have a look at the images below, courtesy of ESPN: 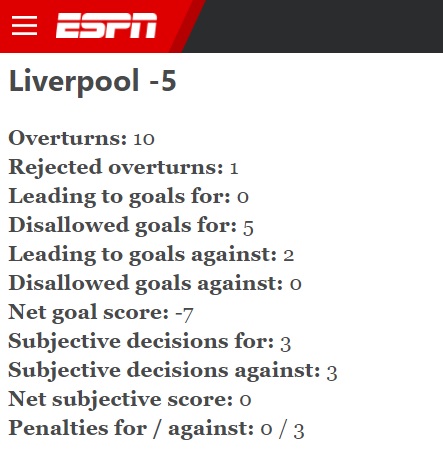