Diogo Jota has revealed his intentions to become a permanent fixture in Liverpool’s first-XI as he hopes to become a bigger influence in the club’s fixtures, as reported by FourFourTwo.

The Portguese has been missing from the squad due to an injury suffered in the dead rubber Champions League group game in Denmark.

“When I first came my target was to get into the team and to know what we have to do on the field,” Jota said. “When I’m fit I know that I’ll give my best in each training session and then each day to give myself a chance of playing.”

“In Portugal they used to say the hardest thing is not to arrive but to stay there,” the forward added. “So that of course is my target. Now that I have achieved a move to Liverpool I want to be a big influence in this club and that’s what I try to do every day.”

The former Wolves man was a surprise purchase by Liverpool for £41m, though the 24-year-old arguably more than justified his fee after  registering 9 goals in 17 appearances across all competitions.

Liverpool have not been fortunate with their injuries of late, having lost Virgil van Dijk and Joe Gomez for what will likely be much of the season, in addition to seeing new signings Thiago Alcantara and Jota ruled out for lengthy periods.

It’ll still be difficult to navigate the rest of the term without sufficient defensive reinforcement of course, but no one will want to come up against our front three with Thiago directing the play behind them.

On top of that, if Diogo can return to his earlier goalscoring form, the lack of options in the centre of defence may not be as much of an issue as feared. 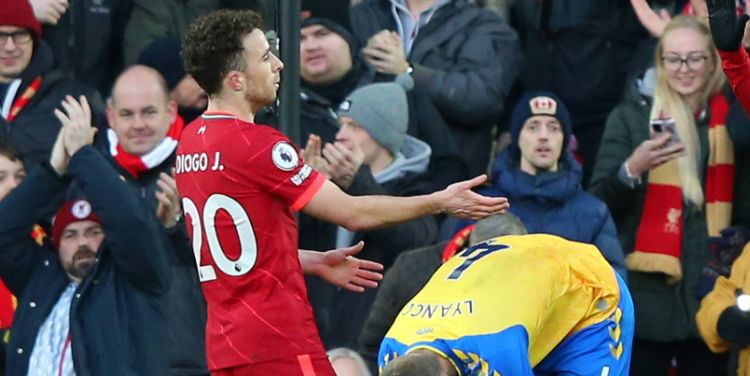