Jose Mourinho was greeted by more than just Jurgen Klopp’s cardboard doppelganger at Marine’s clash with his Spurs side this evening, with one Marine fan leaving the Portuguese a request for the Liverpool boss’ number on a sign

Tottenham came out of the FA Cup third round tie with a 5-0 win over the Merseyside-based club.

With some fans watching from their gardens, it was great to see snapshots like this from the match.

Fair play to Marine for the fight they put up against Mourinho’s men, and we can only hope that someone at Liverpool catches sight of the supporter’s request and gets Klopp in touch with them.

Have a look at the image below, courtesy of BBC Sport (via Daily Star): 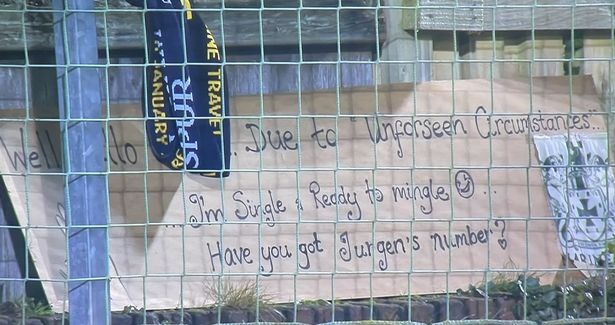