Ahead of the Manchester United’s trip to Anfield this weekend to face bitter rivals Liverpool, former midfielder Luke Chadwick has had a go at picking a combined XI.

To be fair to him, it’s not the worst one we’ve ever seen – but there are two extremely questionable selections he’s made.

As revealed to CaughtOffisde, Chadwick started strong by naming Alisson over David De Gea and then a back four of Virgil van Dijk, Harry Maguire, Trent Alexander-Arnold and… Luke Shaw.

On paper there isn’t anything wrong in rating the former Southampton man, but not when there is an option to pick Andy Robertson!

We’re willing to allow Maguire over Joe Gomez and Joel Matip, especially after being massively distracted by the midfield the former United man opted for.

Again, a strong start – Chadwick went with Jordan Henderson and Bruno Fernandes in the centre of the park, but completed the trio with Scott McTominay.

You could argue that it’s based on form and Thiago Alcantara has been injured, but then how is van Dijk there?! We’re dumbfounded.

It’s hard to complain about his front three, though; Mo Salah, Sadio Mane and Marcus Rashford playing together is a frightful thought.

Take a look at the image below for Chadwick’s full XI in visual form: 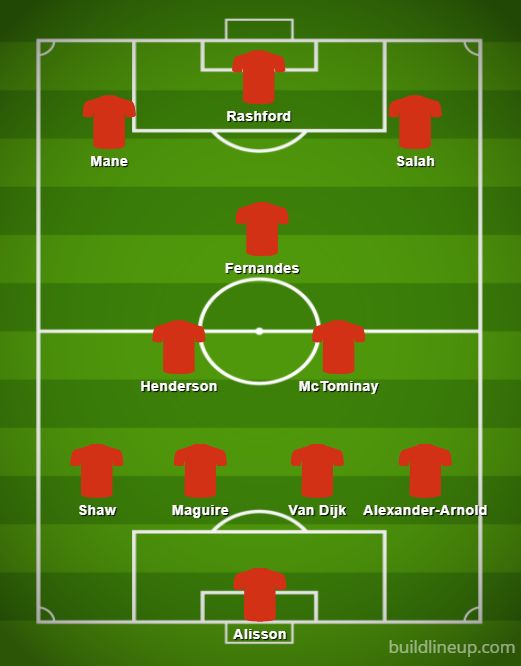