Recent reports in Italy claim that Liverpool have had a €20m offer turned down by Torino for 20-year-old right-back Wilfried Singo.

The news has come out of left field, so this is a good time to provide an overview of Singo’s strengths and weaknesses,

Some obvious takeaways about the Ivorian defender are:

Right-back looks to be an area of need for us, with Trent Alexander-Arnold seemingly feeling the effects of fatigue and Neco Williams not yet fully convincing.

With full-backs on both sides of the pitch being so integral to Liverpool’s forward play, we’ll start by assessing Singo’s top-line attacking numbers.

These charts all rank Singo in comparison to other full-backs in Europe’s big five leagues (EPL, La Liga, Bundesliga, Serie A and Ligue 1). 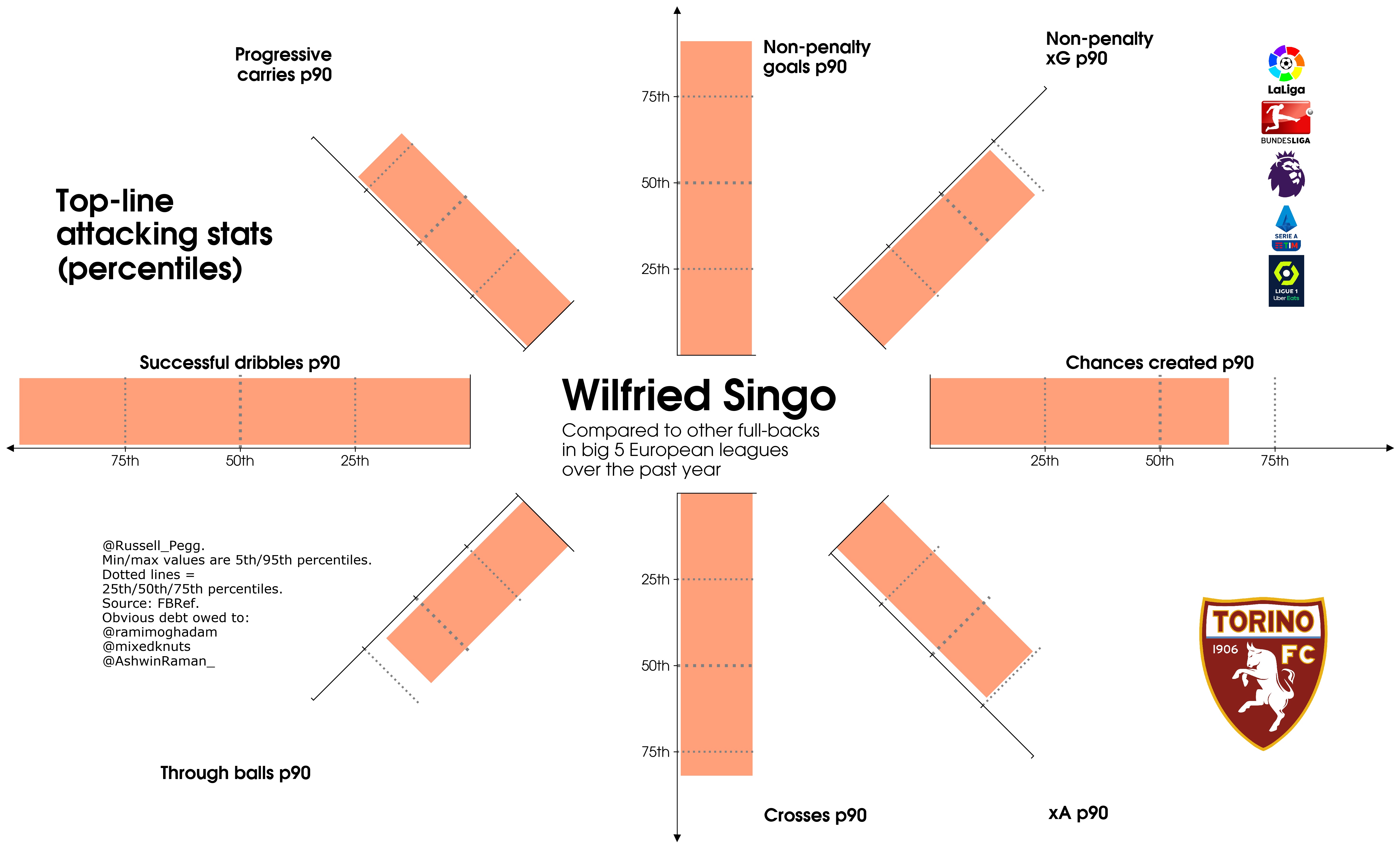 An important thing to bear in mind here is that Torino have been dreadful this season and could easily end up being relegated.

So while Singo’s attacking figures would be encouraging in any context, they’re made even more impressive by having come for a struggling team.

His chance-creating passes are made from areas of the pitch that we’d expect for an attacking full-back: 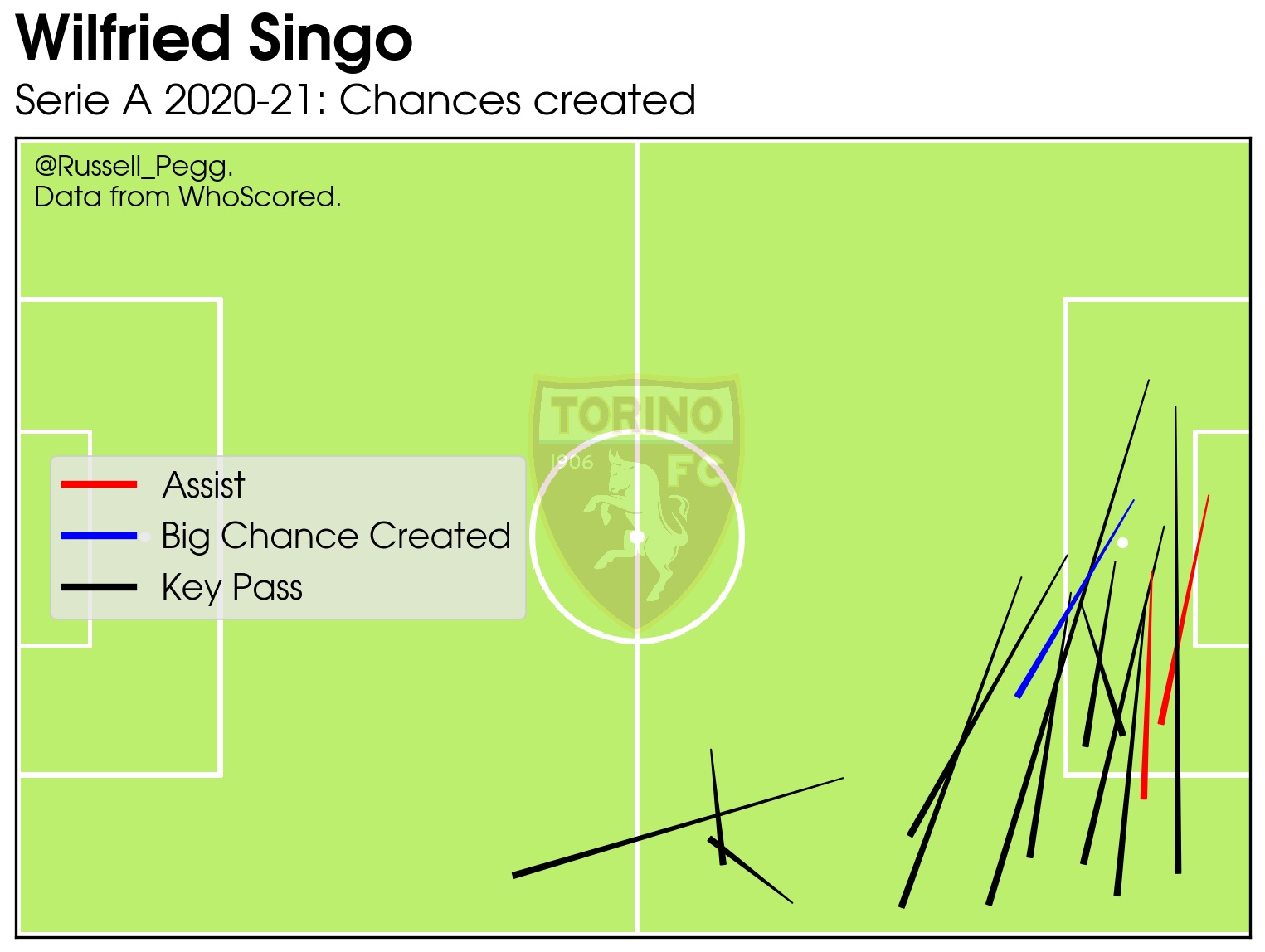 As you can see from the plot below, Singo’s excellent at creating chances either by taking players on or by drawing fouls. His goal-creation numbers from both metrics are even more impressive, and he’s also very adept at not letting opponents dribble past him. 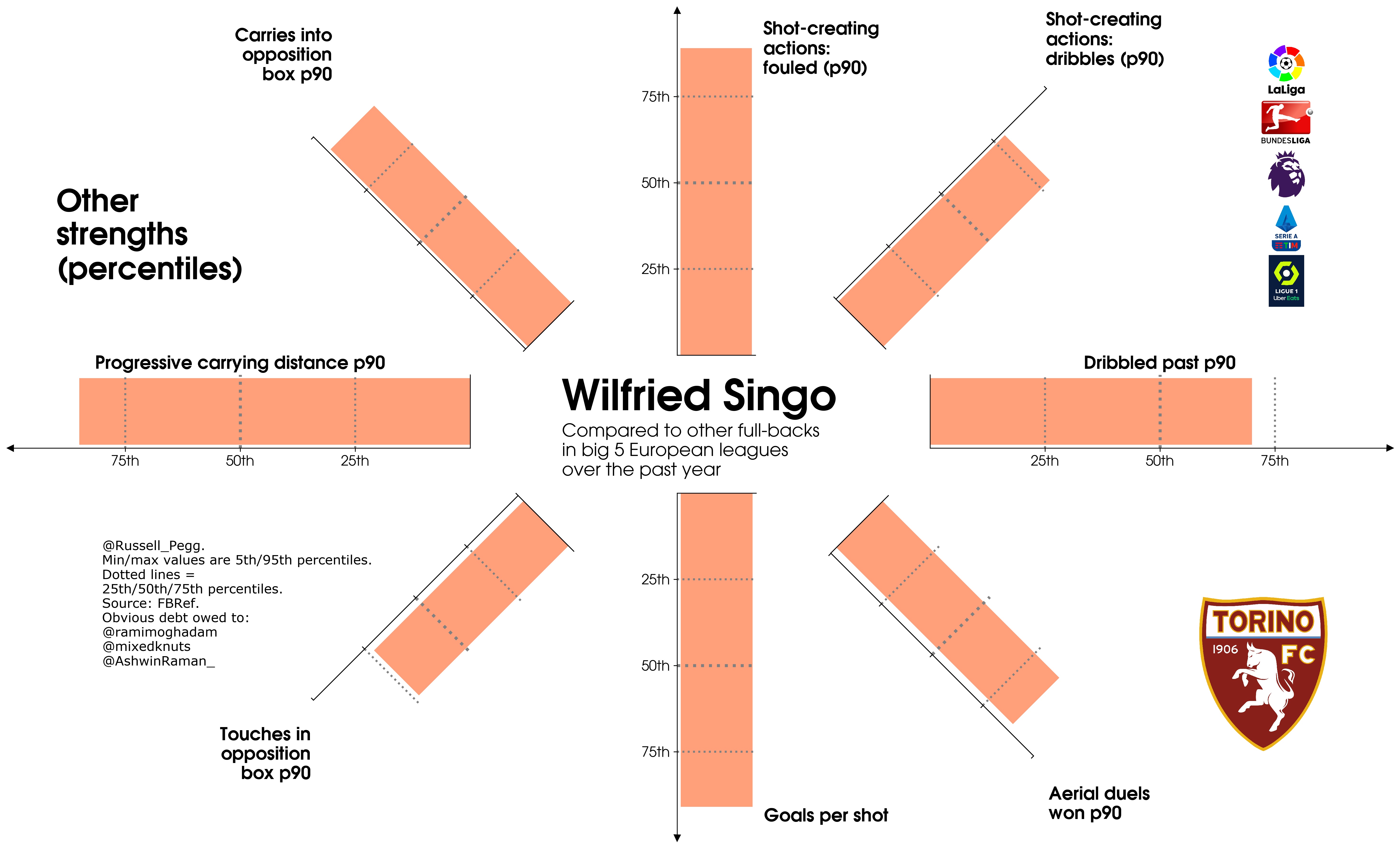 The carrying figures underline that this is a player who likes to move up the pitch with the ball at his feet.

Singo’s excellent conversion rate seems to be the result of judicious shot selection – there’s nothing in the goal-attempt map below from wide areas outside the penalty area: 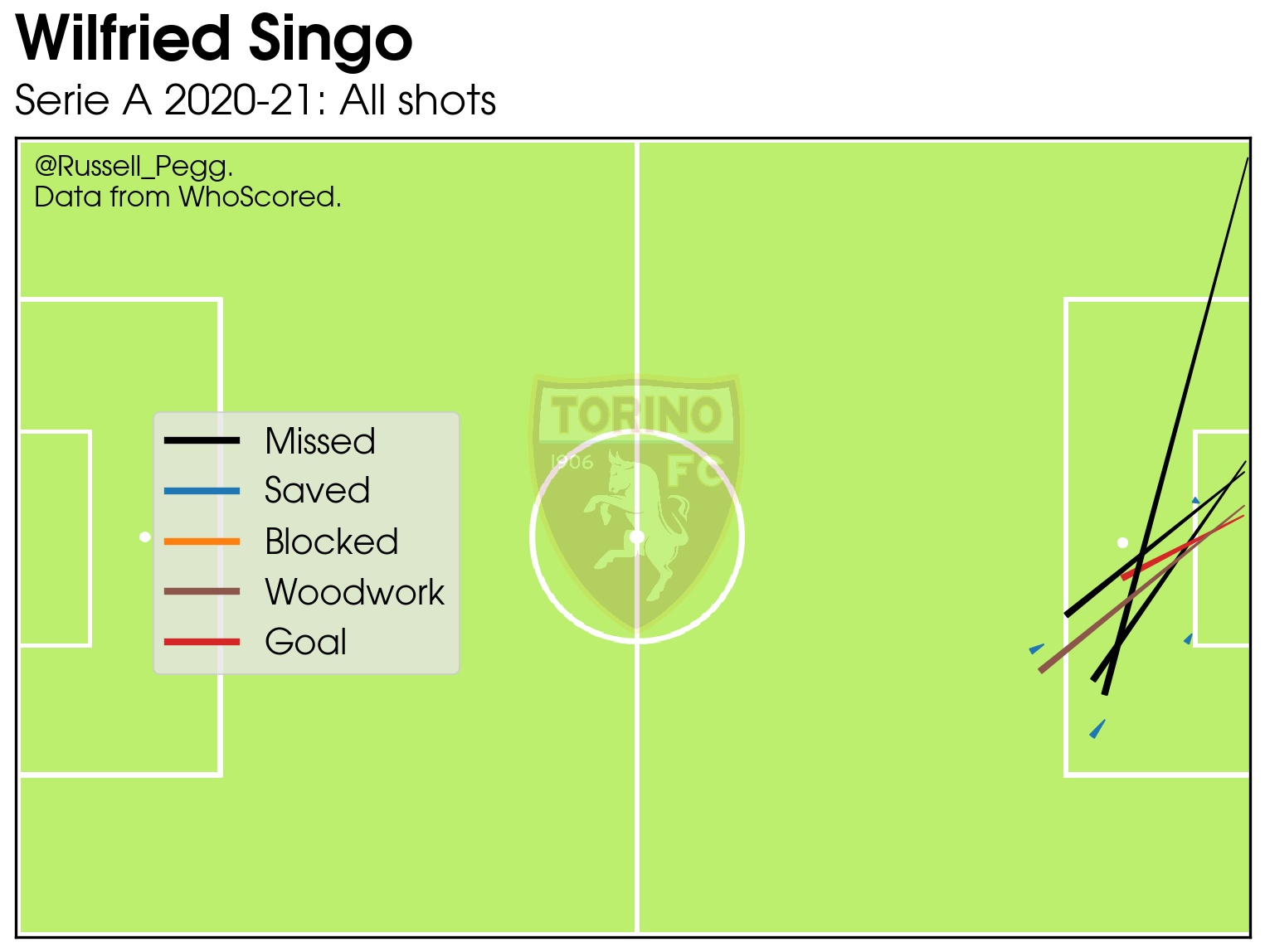 With regards to his lack of pressing, it’s vital to note that only one other side in Europe’s big five leagues – Sassuolo – has pressed less than Torino this season, so it’s very much a team issue rather than one that’s specific to Singo.

Similarly, Torino don’t have much of a passing game – they’ve made the fourth-lowest number of passes in Serie A this term – so again there’s important context for Singo’s figures. 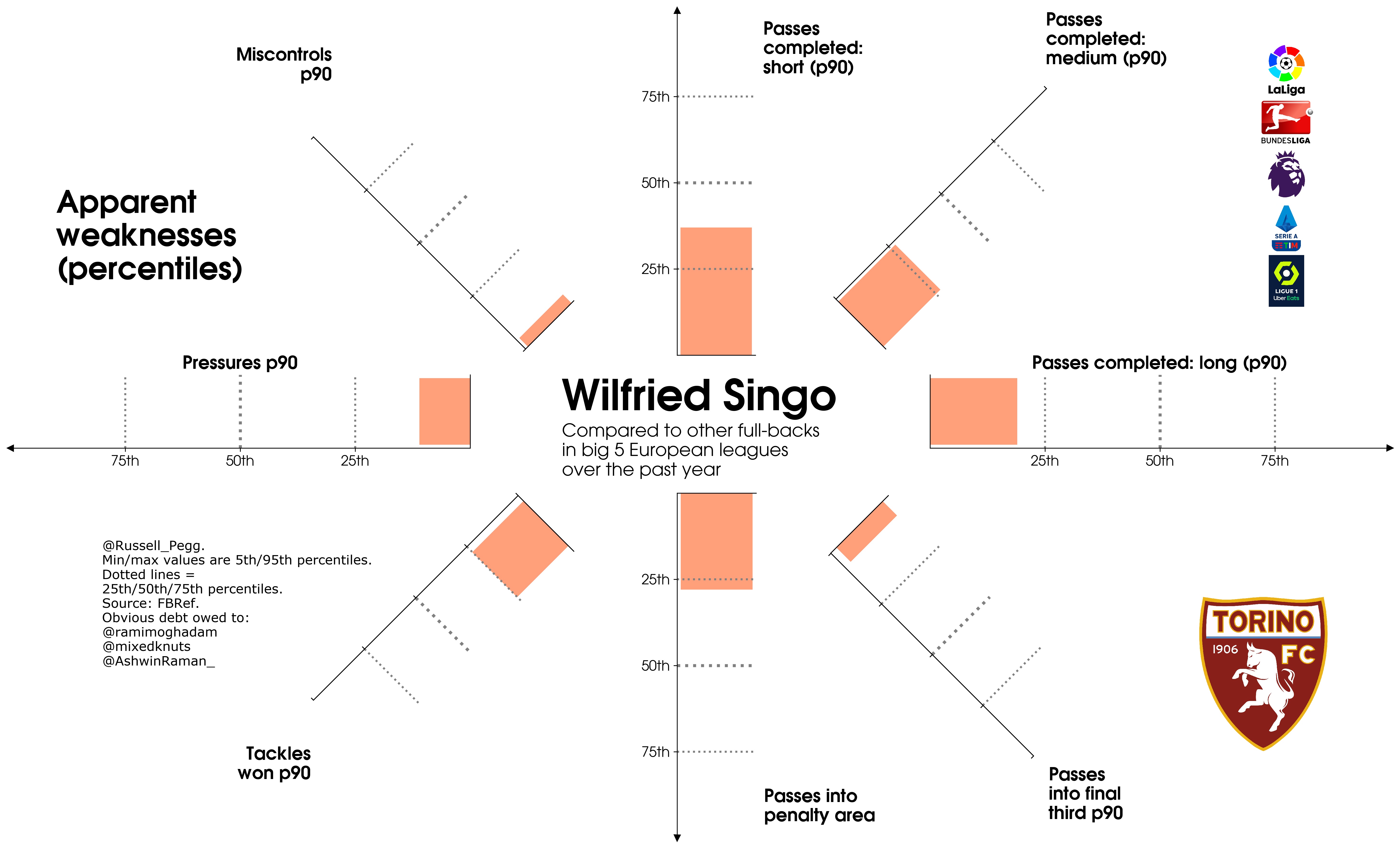 Singo’s passes into the final third show that while he’s capable of cross-field balls and long(ish) vertical passes, neither are a big part of his game at present. 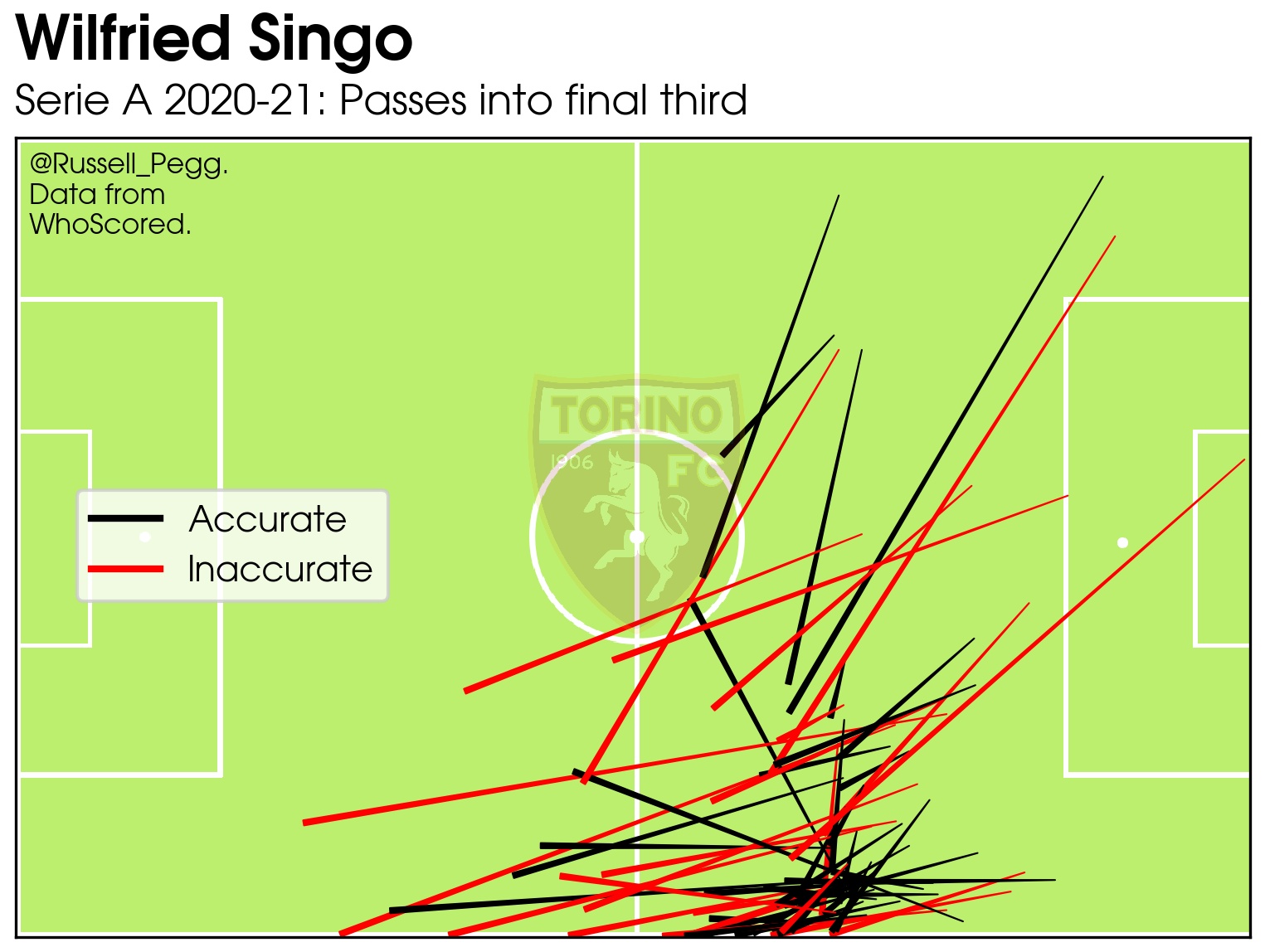 The vast majority of his passes into the final third come in that cluster at the bottom of the image just to the right of the halfway line. This suggests that Singo much prefers short combination play to a longer game.

His passes in to the box are much as we’d expect, though they aren’t exactly a vision of precision: 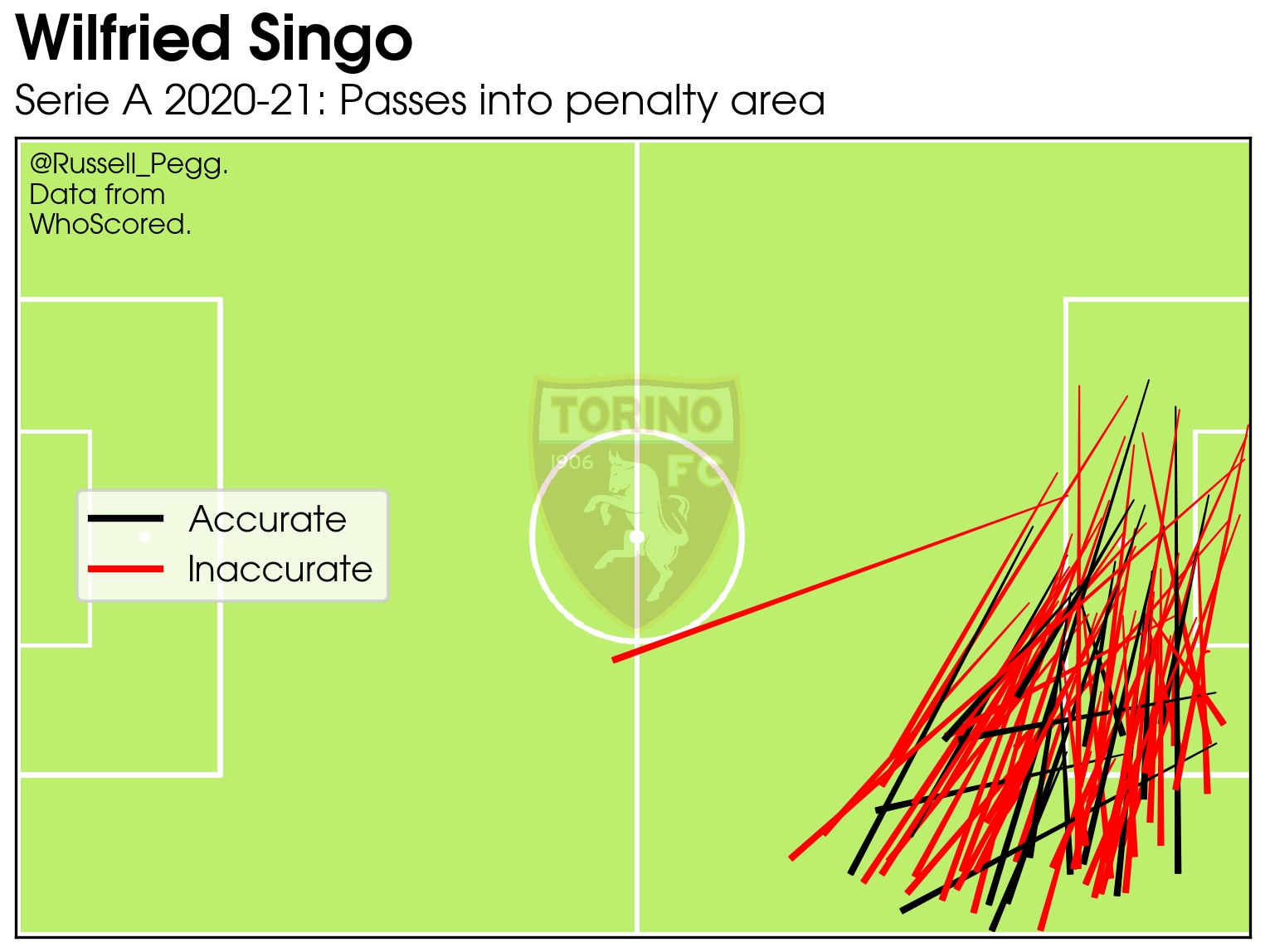 Having only just turned 20, Singo has huge potential to develop further and would presumably be happy to serve as a back-up in the short term.

Those Italian sports papers have a lot of pages to fill every day, of course. But the numbers presented above show that it wouldn’t be too much of a surprise if our interest in the Ivorian were genuine.