Liverpool supporters’ union Spirit of Shankly has quickly moved to condemn the Reds part in the proposed new ‘Super League’.

In a statement on the club’s website last night, the reigning Premier League champions confirmed they’re one of several European giants putting together plans to launch the new competition in time for the start of the 2023/24 season.

The proposed framework involves a total of 20 teams, with 15 permanent members who can’t be relegated and will include six Premier League sides, three from La Liga, three from Serie A, two from the Bundesliga and one from Ligue 1.

Spirit of Shankly wasted no time in hitting back with a scathing tweet – which has amassed 9,000 likes by the time of writing this article – accusing FSG of ignoring fans.

#Embarrassing as fan representatives we are appalled & completely oppose this decision. FSG have ignored fans in their relentless & greedy pursuit of money. Football is ours not theirs. Our football club is ours not theirs. We will respond fully to this statement in due course. https://t.co/vFsykEm1Qz 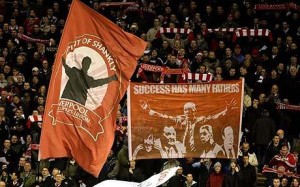 MORE: Klopp quote from 2019 is even more relevant amid Super League news

Spirit of Shankly always nail the general feeling amongst the fan-base and they’ve done it again here – football is the game we all love because the underdog can always climb to the very top of the mountain.

In this new proposed reality of a ‘Super League’, the likes of Liverpool, Real Madrid and Juventus join the mega-rich elite in an near-impossible to reach realm.