A Liverpool fan on Reddit pointed out that Bobby Firmino has provided some crucial goals and assists this season against fellow top four hopefuls.

The Brazilian has suffered a great deal of criticism this term in reaction to a perceived drop-off in form that has likewise affected fellow forward Sadio Mane. 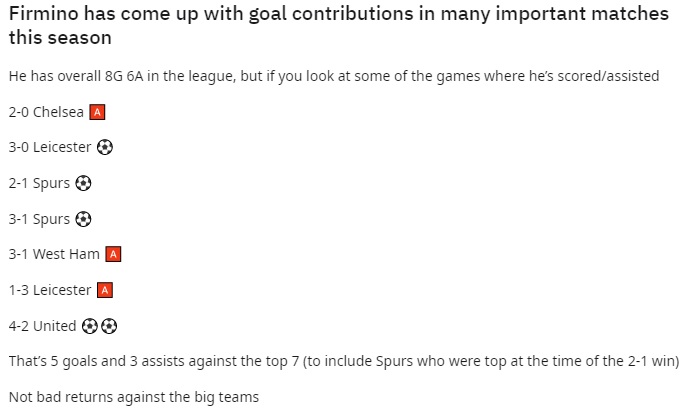 Only Mo Salah appears to have been left untouched, with the Egyptian registering a remarkable 21 goals in the Premier League alone.

READ MORE: Liverpool could secure second major summer signing if Reds are prepared to do one thing – report

Goals and assists are hardly what our No.9 are known for, having often been praised for his work off as well as on the ball, linking up play in the forward line, and selflessly creating goalscoring opportunities for his teammates.

Nonetheless, the point made by u/TurqoiseKingfisher17 is somewhat sound and should be taken into consideration when judging the 29-year-old’s performances as a whole this year.

However, it’s hard to overlook the fact that the former Hoffenheim star simply hasn’t lived up to his best seasons with his outings this time around.

Part of the reason, as Thiago Alcantara has previously mentioned, will undoubtedly be the lack of fans spurring us on, not to mention the disruption to the team structure in the wake of long-term injuries to Virgil van Dijk and co.

While a new forward must remain a transfer priority, we can only hope that Bobby’s prior form will make a comeback once normality has returned.