Xherdan Shaqiri’s farewell message to Liverpool supporters was captured by a fan on Reddit, with the Swiss international thanking the Anfield crowd for its support during his three-year stint in Merseyside.

The former Bayern Munich star enjoyed a modest career under Jurgen Klopp, delivering in key moments – most notably with a brace against Manchester United in the league and assisting Gini Wijnaldum for his second goal in the infamous 4-0 victory over Barcelona.

While he struggled to hold on to a regular place in the starting-XI, the 29-year-old’s quality was never in question.

A failure to amass a single league goal last term alongside Divock Origi drew questions as to whether it was time for us to pursue a new backup attacker.

Moving to Lyon, however, we’d back Shaqiri to get the regular minutes he needs to shine and we’d certainly wish him all the best for his future. 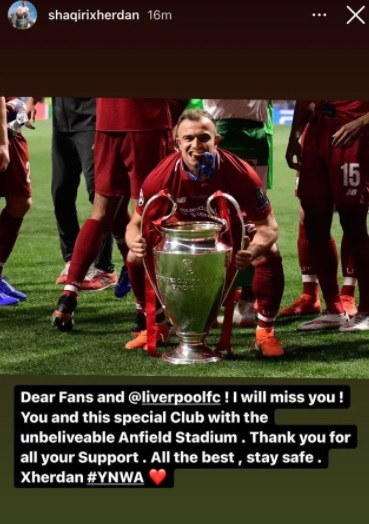 Do Liverpool trust in Naby Keita? Or throw the kitchen sink at getting Saul Niguez?