The 31-year-old took to Instagram to share the news of his fresh deal – immediately after the Reds issued a statement, with the Rangers boss responding in the comments.

Gerrard, calling Henderson ‘skipper’, congratulated the midfielder and dropped a couple of emojis for good measure.

Although just a social media interaction, it’s quite a poignant for Liverpool fans to see the all-time great well and truly passing the torch to the No.14…

Take a look at the screen-grab below. 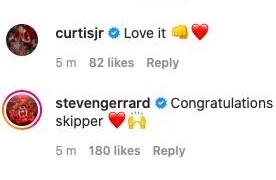