Harvey Elliott has unfortunately been subjected to some pretty horrific abuse from football fans across the league.

After being targetted by one Manchester United fan on TikTok, the highly-rated teenager issued a jovial dig at Ole Gunnar Solskjaer’s side’s expense, highlighting the club’s lack of major trophies in the last eight years.

Though the vast majority of spectators reacted in a supportive fashion after the 18-year-old suffered a dislocation to his ankle in the 3-0 victory against Leeds United, there were a few vile chants issued from the home support that should encourage further investigation.

Whilst we can only applaud Elliott for responding in the manner that he did, it’s extremely saddening to see fans from other clubs acting in such an abhorrent way.

Given how a section of Liverpool supporters were panned – and rightly so – for persisting with an offensive chant of their own, we’d hope that the FA will take matters seriously with the abuse aimed at the club and player during and after our meeting with Leeds.

You can catch the TikTok comments below: 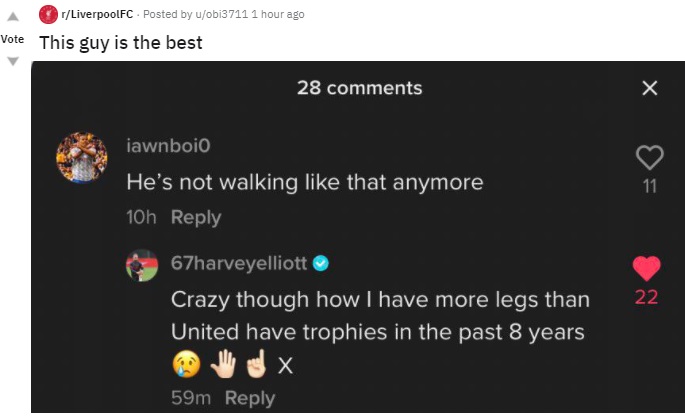