Mo Salah jumped ahead of Leo Messi in the Champions League’s top scorers chart (since September 2017) after netting twice against Porto, as pointed out by an observant fan on Reddit.

Liverpool demolished the Primeira Liga outfit to the tune of five goals, with Sergio Conceicao registering a lone effort in reply, as the Reds held on to their lead at the top of Group B.

Sadio Mane and Bobby Firmino grabbed the remaining efforts, with the latter scoring a quickfire double in the second-half to seal the victory.

It’s an absolutely remarkable set of stats given that the Egyptian international is competing with an out-and-out centre-forward in Robert Lewandowksi and the globe’s top two stars in Messi and Cristiano Ronaldo.

It can be quite easy to forget – particularly as far as neutrals are apparently concerned – that the numbers Salah is posting in a wide position are comparable (and, in many cases, superior) to that of elite strikers.

Indeed, with eight goals in eight games (across all competitions) this term, the No.11 currently looks set to deliver yet another world-class individual season.

You can catch the image below, courtesy of BT Sport & Reddit: 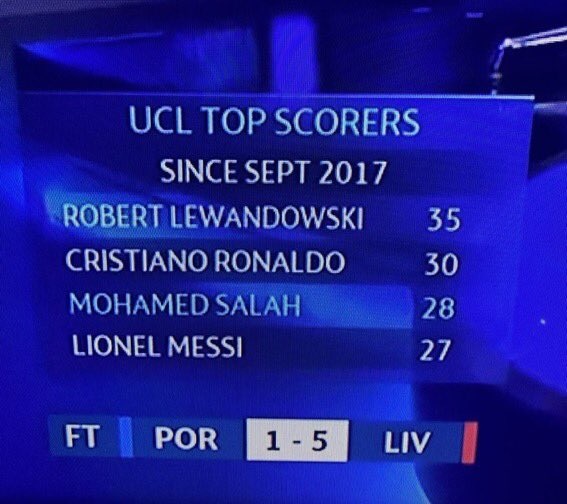