There remains a fierce debate as to who is the better manager between Pep Guardiola and Jurgen Klopp; almost as tightly contested as Liverpool’s ongoing rivalry with Manchester City.

One Reds fan on Reddit, u/evianstill, noticed a remarkable graphic detailing just how close things are between the English top-flight outfits, with only a point separating the clubs (with the Merseysiders leading) since August 2018.

The two sides are set to face each other today in a clash that may potentially have serious reverberations down the line this season.

There’s absolutely no questioning how exceptional a manager Guardiola is given his prior achievements and his impact on the game.

However, it’s likewise hard to overlook the fact that Klopp has excelled under, arguably, far more challenging circumstances, with comparatively limited financial backing – not to mention having his best players poached by Bayern Munich during his time in Germany.

The pair will go down as two of the greatest managers to have graced the Premier League, though, as far as we at the EOTK are concerned – the German is the superior coach of the two.

You can catch the image below, courtesy of Reddit: 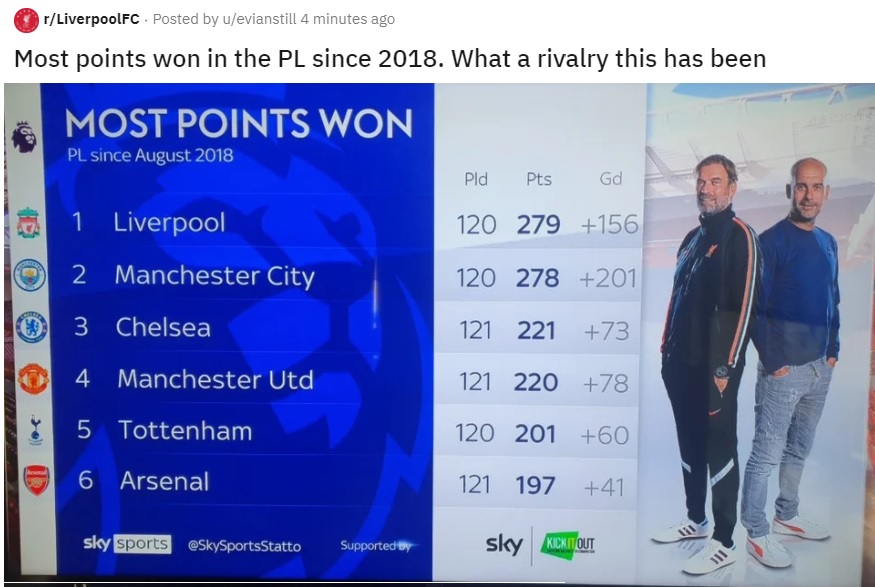