Match of the Day Top 10 is a show where Gary Lineker, Alan Shearer and Micah Richards debate and arrange a list of ten players or moments to decide their favourite.

The most recent episode was released yesterday and the top ten full-backs in Premier League history were discussed, with our current pairing on the list.

Andy Robertson was placed in fifth position before it was revealed that Trent Alexander-Arnold was voted as the second-best, behind only Ashley Cole.

All three joined together to praise our prodigious duo, with Lineker saying: “Those two Liverpool full-backs, Trent and Robertson, have been so consistent.”

Former defender Richards was on hand to analyse our No.66: “In terms of right-backs now, I’ve never seen anything like that in terms of the quality that goes into the box consistently.

The trio went on to discuss how the player they all admire so much can’t make it into the England team, with the host and former Leicester City forward saying: “It’s just so hard to imagine any other country in the world that he wouldn’t be first pick because he’s so good.”

In agreement, the ex-Man City player said: “I’ve got 13 caps and Trent’s only got 14, I think, look at the player he is and he’s got Reece James who’s ahead of him.”

There’s no doubt the love the Scouser in our team has for our club and the admiration Jurgen Klopp and most football fans have for him.

The only debate is why he isn’t playing more regularly for his country; it’s hard to imagine that he will never get a sustained chance in the team eventually and particularly when he is rated so highly by most pundits within football.

It’s not too much of a concern for us though, as the 23-year-old has plenty of time to get himself to the top spot of best Premier League full-backs and long may his unbelievable form continue.

You can watch the full breakdown on BBC iPlayer. 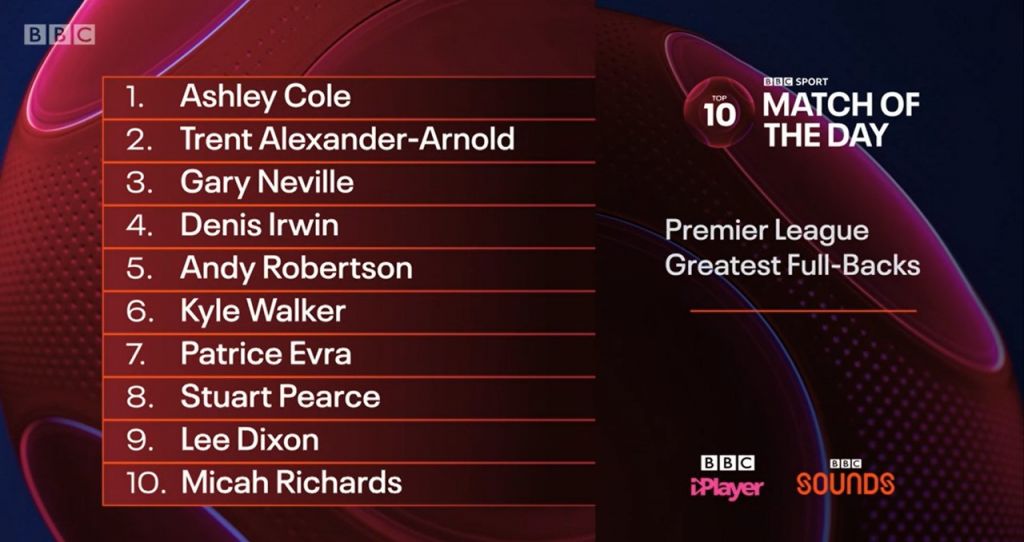 Football News 24/7
(Video) “We need to try and get the confidence back” – Robertson bemoans Liverpool’s run of form
January 30, 2023 10:45
Andy Robertson points to a lack of confidence following ‘disappointing’ FA Cup defeat at Brighton
January 29, 2023 17:15
(Video) Trent turns defensive saviour with off the line clearance v Brighton
January 29, 2023 14:04
Former PL manager urges Jurgen Klopp to try 24-year-old Liverpool star in midfield role
January 27, 2023 19:22
Robertson labels Liverpool teammate ‘an absolute disgrace’ because of what he did at his wedding
January 25, 2023 16:46
Robertson on the five different leaders within the Liverpool dressing room
January 25, 2023 15:44
Robertson on how he twice organised ‘fantastic’ Calvin Harris to DJ for the Liverpool squad
January 25, 2023 14:45
What Trent did on LFC bench right after Chelsea offside goal speaks volumes
January 21, 2023 13:01
(Video) “Lighting up that pitch, not only with his touch but with his smile” – Alexander-Arnold’s hilarious Firmino commentary
January 20, 2023 9:47
(Photo) Gary Lineker discovers source of pornographic ‘sabotage’ on BBC set ahead of LFC v Wolves
January 17, 2023 21:09