James Milner has taken to his personal Instagram account to provide fans with an injury update as he continues to recover from a hamstring injury.

The 35-year-old has been absent since limping off during the first half of Liverpool’s 5-0 win at Old Trafford in October.

He uploaded a video of himself in the gym completing some exercises alongside the caption ‘Another step closer 💪‘.

In a press conference prior to last month’s Carabao Cup tie against Preston North End, assistant manager Pep Lijnders joked that our No.7 should be referred to as Klopp’s right-hand man considering the impact he has on the squad – even when he is unavailable for selection.

This led to speculation that the former England international will remain at Anfield as a coach once his playing days are over.

Considering he is a perfect role model for our younger players and is someone that gives 110% every game, it wouldn’t be a bad idea to keep him on Merseyside when he hangs up his boots.

Below is an image of the Yorkshireman continuing his road to recovery, courtesy of his Instagram account: @jamesmilnerofficial 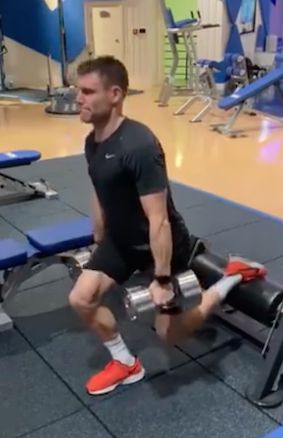