Mo Salah has taken to his Instagram account to let supporters know how he is feeling following Liverpool’s 4-0 win over Arsenal yesterday.

The Egyptian King netted his 16th goal of the season in the rout at Anfield and posted on the social media site alongside the caption ‘A picture is worth…’. 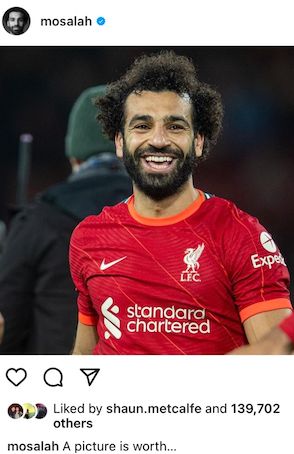 The No.11 has been in unbelievable form so far this term and with 11 goals, he is the only Premier League player on double figures.

In January, Salah and Sadio Mane are participating in the African Cup of Nations, so prior to their departure, the former Chelsea man will be hoping to increase the current four-goal margin between him and second top scorer Jamie Vardy.

It’s great to see Mo in such a good mood – long may the positivity and his world-class performances continue.