For Taki Minamino, the next few months will define his Liverpool career – and ultimately whether he’ll able to maximise the potential we thought we were buying from Red Bull Salzburg in January 2020.

Upon arrival, despite much fanfare, the Japan international barely got a sniff as the Reds cantered to the title. He sat on the bench and was then forced to isolate alone, in a new country, as COVID halted our procession.

For a while, the only real look we got of our new signing was his awkward participation in Liverpool Zoom yoga sessions. Footballers were obviously not the victim of the pandemic, but the bizarre nature of Minamino’s first six months at the club would have obviously affected a character who is clearly shy and introverted. So out of the group he felt, Minamino was embarrassed joining in the title celebrations, although Jordan Henderson quickly got him involved.

That persona doesn’t necessarily help an attacker in a Liverpool side whose role requires specifics. They must press frenetically, show charisma, creativity and have the courage to take charge of situations. Mo Salah is a similarly quiet and humble guy off the pitch, but when he crosses the white line, he’s animalistic; a quality Minamino has yet to hint at on Merseyside.

On the whole he’s proven neat, tidy and technically adept; but lacking in physical strength and an understanding of the Premier League’s speed.

Yet, this season, his numbers are superb. 242 minutes played across the League Cup, Premier League and Champions League – and four goals. Against Arsenal at the weekend he came on and scored with his first touch, making the excellent back-post run Salah and Sadio Mane have mastered.

In his only two starts this season, he’s scored three times – admittedly against weaker opponents in the League Cup – but what else can he be expected to do? He’s scoring every time he gets an opportunity and Jurgen Klopp is impressed.

“You can’t imagine how happy I am with Taki,” he told reporters following the 4-0 Anfield drubbing.

“He’s in an incredible moment and today he was actually our solution for four positions, I think.

“Five positions actually because he could have played both eight positions and all three upfront. He’s in a really good moment and you see that.

“I’m pretty sure he played really well for Japan in the international games. Now he’s here and very important for us.

“We’re so happy, everybody was so happy for him that he scored the goal. The way he played today reflects how well he is training at the moment.

“He will have games, no doubt about that.”

In fairness, Klopp regularly exalts his squad players… It’s how he keeps them happy and motivated and not necessarily because he rates them. After all, Klopp has lauded Nat Phillips on countless occasions but hasn’t even given the Englishman a League Cup start this term.

But the reality is, for the first time, Klopp now must rely on Minamino.

Roberto Firmino is injured, with Divock Origi ill, meaning right now, Taki is the fourth choice attacker. He’ll play tonight in the Champions League v FC Porto, and probably in the dead-rubber at the San Siro on December 7.

Most importantly though, he’ll be the option in multiple January fixtures when Salah and Mane are at the African Cup of Nations.

There won’t be an incoming player on January 1 to ease the burden. It’s not Klopp’s style and definitely not FSG’s. Instead, the German will trust the players already at his disposal and providing he stays fit, Minamino will presumably be top of what’s left.

The Reds could face Leicester, Chelsea, Brentford and Crystal Palace without our superstar attackers, as well as two FA Cup ties and potentially two legs of a League Cup semi-final. Hopefully FIFA will allow Salah, Mane and Naby Keita a late exit to Cameroon, enabling them to play v Leicester and Chelsea, but assuming that organisation’s common-sense would be silly.

Minamino has shown he can inject some spark into an already winning side, and proven capable of downing lower league minnows, but he’ll now be given the responsibility to lead from the front.

At Salzburg, he was a leader; a footballer who knew how good he was and expected himself to be a game-changer. Remember how he took the reins at Anfield and left our players begging Klopp to buy him?

But at Liverpool, he’s respected the greatness of those same players too much.

Diogo Jota and, to a different level, Harvey Elliott, came in and wanted to stamp their identity on the side. And as a result, have been a success and a massive benefit to the squad.

Minamino failed to do that, but is finally bristling with confidence and you can see from his demeanour he’s more settled into the squad and hopefully the club’s environment as a whole.

Look at his face upon scoring in front of the Kop, but also what it meant to his teammates:

If he doesn’t take the bull by the horns now and continue to knock on Klopp’s door via exciting cameos, the boss may not even turn to him in January – which would obviously prove he’s no longer required.

Taki must accumulate minutes in the run-up to the AFCON, find rhythm and some form so that he can hit the ground running in just over a month’s time.

There will be some who will simply argue he’s not good enough, but has he really been given the chances to prove that theory right or wrong?

Last season, he opened the scoring in the 7-0 battering of Crystal Palace that saw us top of the table at Christmas, but then wasn’t given a single minute of football before being loaned out to Southampton!

It looked like Klopp had marked his card, but through perseverance and circumstance, Minamino is back in contention. He won’t get another opportunity if he doesn’t seize this one.

One response to “Editor’s Column: It’s now or never for Taki Minamino” 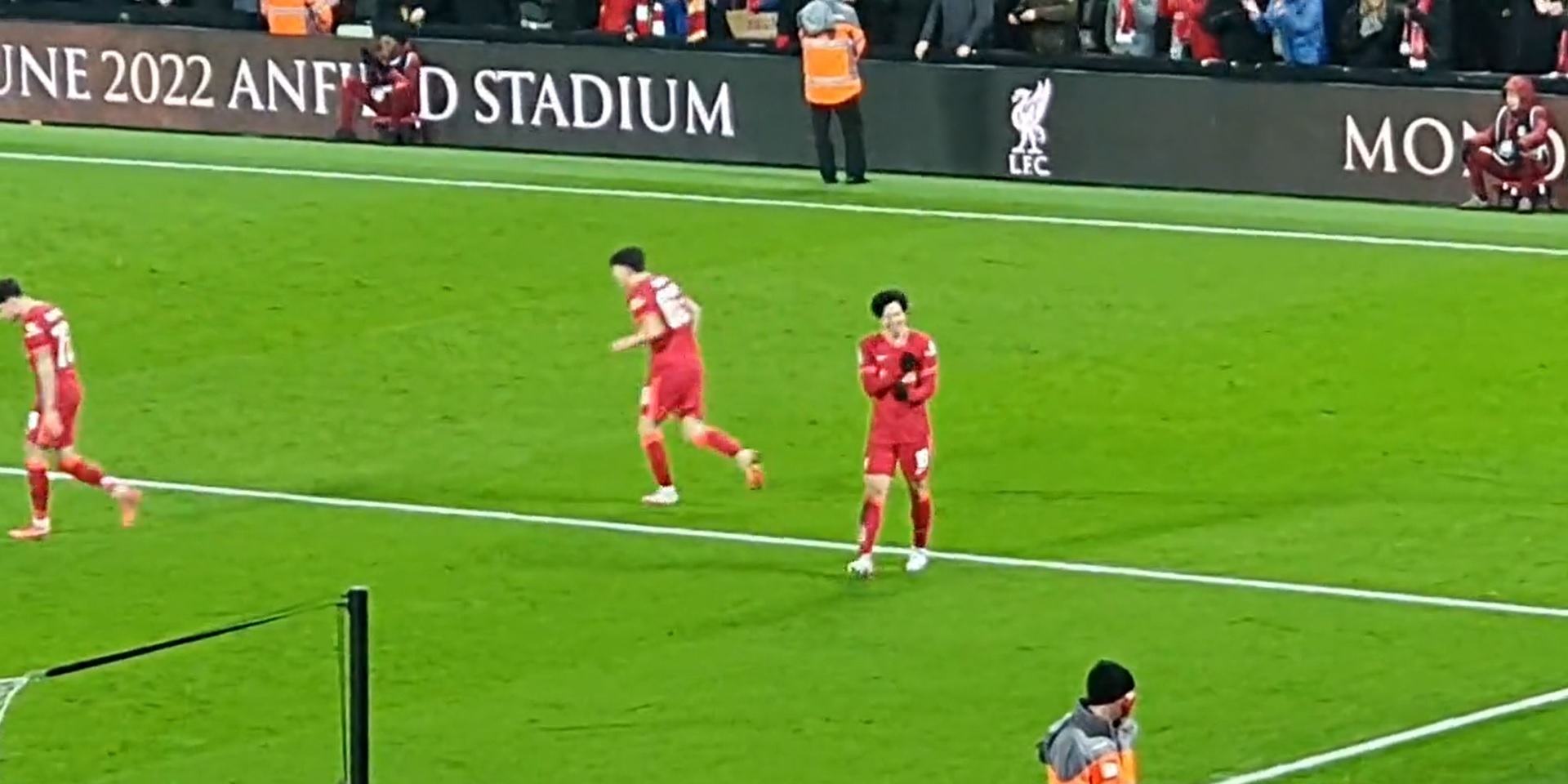 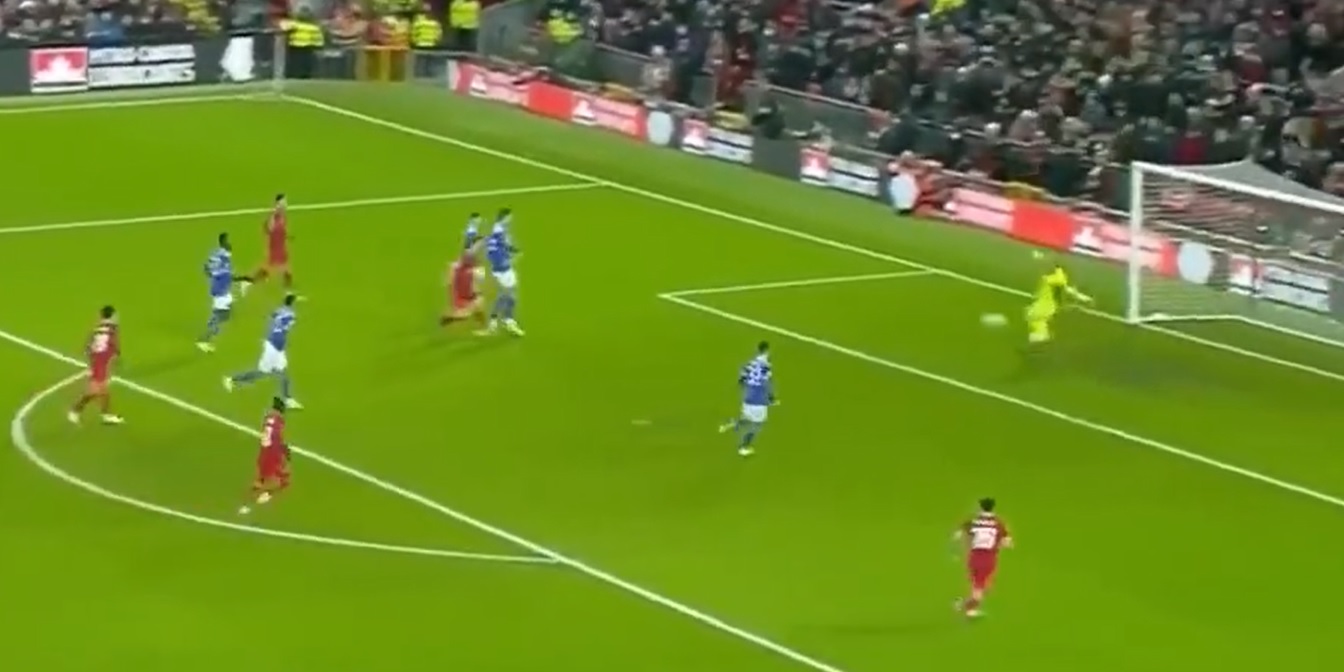