Diogo Jota has thanked Divock Origi for scoring a late winner at Molineux yesterday after the Portugal international had produced one of the misses of the season earlier on in the match.

The 25-year-old simply had to pass the ball into the back of the net to put his side ahead in the second half but instead the forward fired the ball straight at Conor Coady on the goal line and the ball was then cleared.

The game was looking likely to end as a goalless draw until second-half substitute Origi netted in the 94th minute of the game and sparked wild scenes amongst all those connected to the Reds.

Our No. 20 simply replied ‘Thanks 🥳’ to Origi’s post which stresses the relief the forward had that his miss didn’t end up costing us at the end of the game.

Picking up all three points was vital for Jurgen Klopp’s men in their attempts to win a second Premier League title, especially when you consider that Chelsea were defeated by West Ham yesterday.

The win took us to the top of the table for a few hours until Manchester City defeated Watford and leapfrogged us. 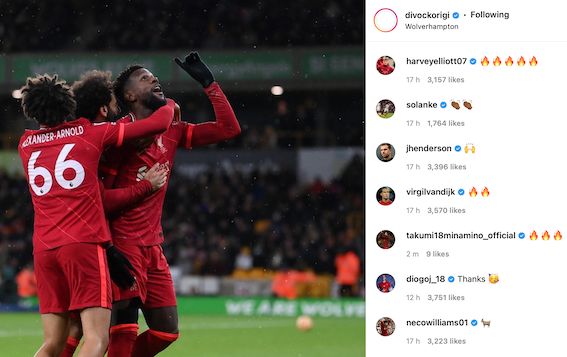