Sami Hyypia is the player with the seventh most appearances for Liverpool as captain and now looks to be trying his hand at a different sport.

Our former No.4 played 464 times for the Reds in a 10 year stay at Anfield and there have only ever been 19 others to make more appearances for the club.

Since leaving Merseyside in 2009, the Finland international tried is hand at management with Bayer Leverkusen, Brighton and Hove Albion and FC Zurich.

READ MORE: (Video) New angle of Diogo Jota foul against Tottenham shows how bad the decision was to not give a penalty

The 48-year-old has also dabbled in Motorsports on land and snow, enjoying the motorbike and snowmobile as well as skiing and has now found himself back in training for a former favourite sport.

In an image shared on his Instagram, he has made a comeback to ice hockey through local team Kittilän Palloseura ry.

It’s great to see our former centre-back enjoying his retirement and being so active, let’s see if his competitive spirit sees him rise to the top at a different sport now too.

Here is the picture that Hyypia uploaded to his Instagram story: 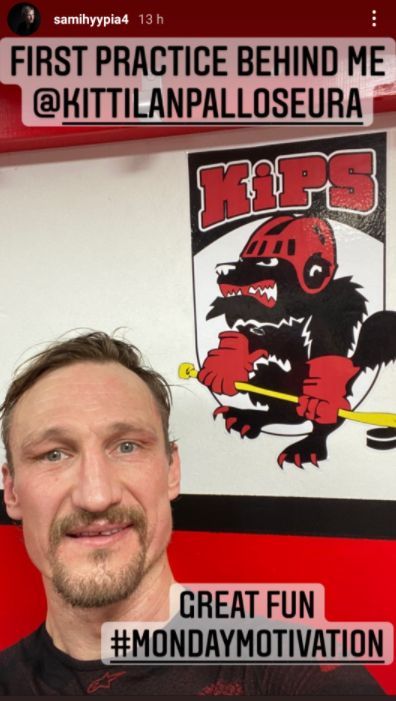 Football News 24/7
Sami Hyypia opens up on the ‘dream come true’ moment signing for Liverpool and discusses how he felt when Steven Gerrard replaced him as Reds captain
March 27, 2022 11:48
Sami Hyypia on the ‘honour’ of sitting in Virgil van Dijk’s place in the AXA Training Centre
March 26, 2022 11:25
(Video) Sami Hyypia shows off his skills ahead of his Anfield return for LFC Legends game
March 25, 2022 16:30
Sami Hyppia returns ‘home’ sharing pictures and videos of his return to Anfield for the visit of Inter Milan
March 9, 2022 14:24
(Images) Sami Hyypia and Virgil van Dijk back new Liverpool centre-half
February 18, 2021 8:01
Liverpool star draws comparisons to Sami Hyypia
December 11, 2020 8:46
Virgil van Dijk destroys Jamie Carragher with brilliant answer in Q&A
March 31, 2020 20:05
Sami Hyypia names the Reds man who will be the ‘final piece of the puzzle’ in Premier League title pursuit
October 13, 2019 9:37
Reds legend names the player who has stood out for him this pre-season
July 27, 2019 11:08
Fernando Torres on ‘nightmare’ under former Liverpool manager
March 17, 2019 9:48