Liverpool star Trent Alexander-Arnold appears to be enjoying some well-earned time off with a relaxing holiday abroad and has taken to his Instagram account to showcase the picturesque views from his current location.

Our No. 66 will make many supporters jealous with his post, captioned ‘Island Boy’, as he can be seen relaxing topless in a hammock looking out to the crystal clear water.

In typical fashion, Andy Robertson has decided to joke with his teammate and commented ‘And breathe out!!!!’ in reference to Trent’s impressive physique. 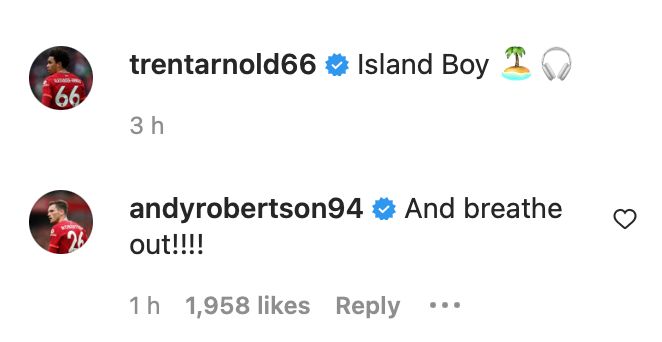 Former Hull City man Robertson has also been spotted enjoying the Premier League’s winter break this week – he joined teammates James Milner and Alex Oxlade-Chamberlain in Dubai for a round of golf in the sunshine.

Trent leads the way in the Premier League this season with 10 assists, Mo Salah has nine and our ‘Flying Scotsman’ is in third place with an impressive eight – including two assists in the recent 3-1 victory over Crystal Palace.

It’s great to see that both our full-backs have a great relationship off the pitch too!