Goals are an easily accessible statistic for Liverpool’s history but assists have not always been so readily reported or recorded.

Now, thanks to lfchistory.net the full list of all our assists from ‘players who made their debut after the 1969/70 season’ has been compiled in a huge research effort by the people who run the site.

Trent Alexander-Arnold (58) and Bobby Firmino are the only current players in the top 10, with the Brazilian sitting higher in 7th place and level with Steve Heighway on 66. 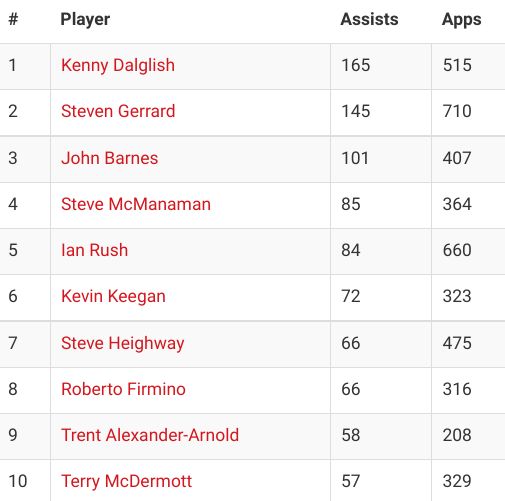 The research team are working to extend the years included in the list with ‘the aim is including each season since 1950/51’ and we have to salute their work, acknowledging the past is a brilliant effort from all involved.

Football didn’t begin in 1992 and the work of lfchistory.net is invaluable for securing that our history is correctly remembered, there are not many other sites like theirs and you should check them out!