Joel Matip seems to be slowly losing his place in Jurgen Klopp’s side to Ibou Konate and has missed the last two games for Liverpool.

The Frenchman had appeared to be the man for the cup competitions but his place in the line-up against Tottenham Hotspur may suggest that our No.5 is set to start the final five games of the season.

Following the scare against Villarreal and then draw against Spurs, where we have conceded three goals in two games, one supporter took to their social media to voice their displeasure at the line-up.

Twitter user @Dan15za Tweeted: ‘Joel Matip at Wembley. Joel Matip in France. Joel Matip every game till the end. It’s insane how much worse our defense looks without him’.

This is not a wild observation and many will be in support of our No.32 playing in all of the final games this season too, including his wife – Larissa Matip.

She liked the Tweet and this suggests that she has also been a little frustrated at how her husband has missed the last two matches.

Whether that is an insight to the Cameroon international’s thinking or not, it certainly shows that some of the Matip household are wondering why he’s seemingly dropped down the pecking order.

You can view the Tweet and the liking by Larissa Matip via @Dan15za and @LarissaMatip on Twitter:

Joel Matip at Wembley. Joel Matip in France. Joel Matip every game till the end. It’s insane how much worse our defense looks without him 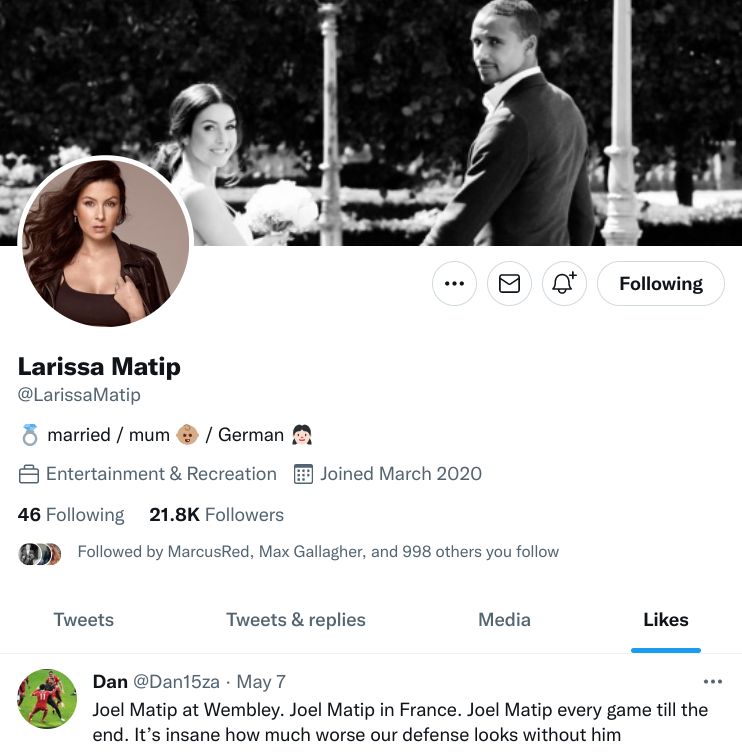